DISCLAIMER: This post will be loaded with Exploration spoilers. In it I’ll be detailing my experience exploring the ancient, potentially alien, ruins discovered by XDEATH after the launch of Elite: Dangerous Horizons – The Guardians, a couple of weeks ago. If you want to find the planet, the ruins, and all the things in it on your own, stop reading now. There, I did my duty … heheh, duty.

Firstly, mega props to XDEATH for thinking of, and then doing the math to locate the planet where these ruins are located going only off of brief glimpses of the ruins, and surrounding sky, found in the launch trailer for Patch 2.2. As I understand it, going from the forum thread tracking this discovery (and others), XDEATH triangulated the location of the planet by using the stars, nebulae, and other celestial bodies visible in the sky above the shots of the ruins in the trailer. Wow, just … head explode. Thanks to him, though, we now know the planet in question (and there is no reason to believe these are the only ruins out there), is SYNUEFE XR-H D11-102 1 B. And further, due to his and others’ scouring of said planet, we know the ruins are located at LAT -31.7877 / LONG -128.9711. 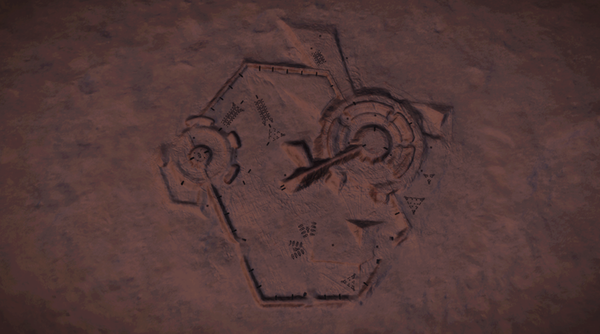 Armed with just this information, and no expectation of what I’d find (I tried my best to keep myself spoiler free once I knew where the ruins were), I loaded up my Asp Explorer and headed out. SYNUEFE XR-H D11-102 is located just outside The Bubble, about 368.4ly from SOL; not a long haul at all, considering I’ve been making regular smuggling runs out to ROBIGO, SOTHIS, and CEOS. When I got there, in Open Play as I always am, I found several other commanders in and around the ruins. I was actually amazed that I could see their SRV and ship lights from well over 100km away, as I approached the ruins. Figuring that I’d probably get to see more and interact with things without interruption, I switched to Solo Play after exchanging brief hellos getting a quick lay of the land. 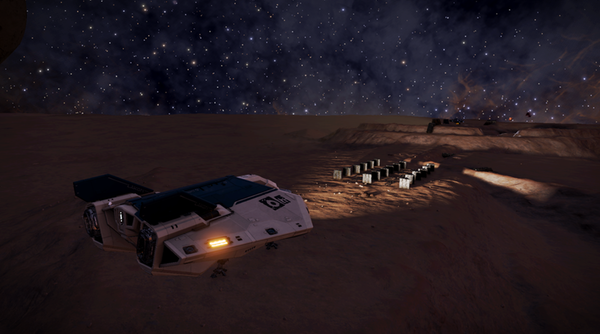 The complex is pretty big; it’s about the size of the current Planetary Installations we have had in the game since Horizons launched. Ancient walls and even what appear to be the foundations of dwellings are visible in the dust along with several fields of Obelisks arranged in varying patterns and rows. I knew, from watching the launch trailer, that there were also buried Pillars that would rise out of the ground when approached, so I immediately set out looking for those. The first thing I came across, though, was an Ancient Urn that I was able to scoop up. 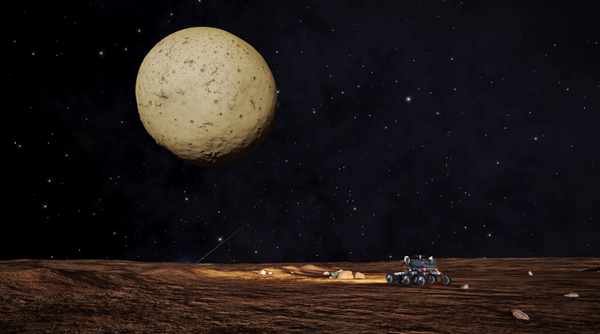 I quickly discovered that there were an assortment of Urns, Totems, Orbs, Caskets, and Tablets, scattered all about the ruins, to collect. I spent a lot of time doing this, dismissing and recalling my ship to transfer cargo to it before I finally came across the first hidden Pillar in the most unusual way. I thought, initially, my exploration of the ruins was going to come to an abrupt end. 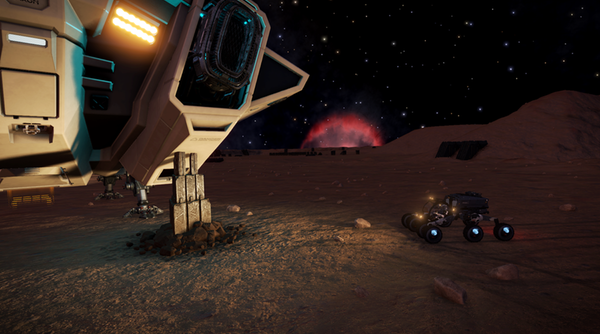 David Braben, head of Frontier Developments, has admitted he didn’t expect players to locate these ruins so quickly. As such, there’s bound to be a few hitches as I’m sure the Devs expected to have more time to iron things out. I think I came across one such hitch. I had just recalled my ship, for probably the 6th or 7th time, and it landed in a wide open, flat area of the ruins I hadn’t yet explored. As I approached, suddenly the ground began to rumble and this Pillar began to rise directly under the starboard engine of my Asp. I immediately started to dismiss my ship fearing that either or both ship and Pillar would be destroyed. It rose pretty quickly, though, and immediately clipped through the ship with no apparent damage. My next fear was that the ship would take damage or be destroyed on take off. I quickly boarded the Asp and several nail-bitting seconds later found that neither was the case. The Pillars seem to only be triggered to rise by an SRV; flying near one’s location won’t do it. Also, ships on autopilot don’t seem to be aware of these locations when choosing landing sites. I’ll post a bug report later. 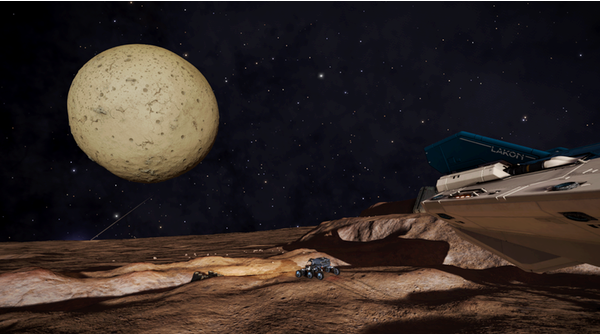 That crisis averted, I chose a landing site that I had previously explored with my SRV, and just left my ship there for the duration; the complex isn’t so large that your ship will auto-dismiss while you’re exploring it. I spent a lot of time driving around the ruins, purposely avoiding the fields of Obelisks, looking for more Pillars and artifacts to collect. I collected everything I could, and tried scanning all the pillars I found in hopes that it might activate something else, but to no avail. I did, however, discover that the the ruins reset when you log out. When you log back in, all the artifacts reappear and the Pillars are hidden once more. You can also shoot the Pillars, which knocks the Relic floating inside them loose, allowing you to collect them as well. 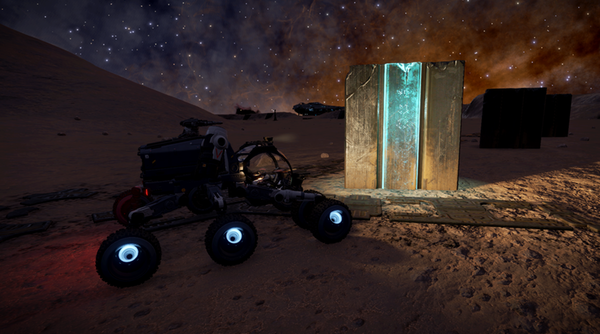 I finally turned to the fields of Obelisks and fairly quickly discovered that some of them would activate when approached. They have flashing patterns on them and a distinct sound, and I suspect that, because only one side lights up, they might be pointing to something. That’s a hypothesis I may test later. Shooting them didn’t seem to do anything, but scanning them grants some data patterns. These patterns seem to be random, between resets of the complex via logging out and back in, but are all designated Patterns Alpha, Beta, Gamma, Delta, and Epsilon. It appears as though these patterns will be used, somehow, by Engineers for crafting module upgrades. 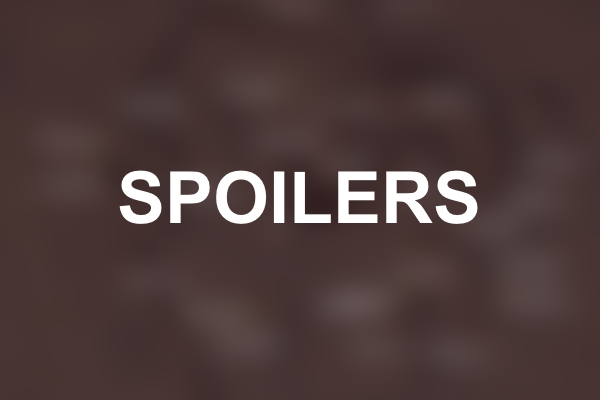 And that’s pretty much all I was able to discover on my journey out to the Ancient Ruins in SYNUEFE XR-H D11-102. One of the first things I did, when I arrived at the complex, was to take an aerial photograph of the ruins from 1.5km up. I then used this map to make notes of the things I found, as I went, including their LAT/LONG coordinates. If you don’t care about spoilers, and want to see all the things I saw, clicking the SPOILERS image above will take you to my completed map. When I was all done, I went back to the forum thread tracking this discovery and was delighted to find that I had found, on my own, everything that others have found so far. I haven’t done nearly the amount of experimentation they have and are planning, but I’ll be monitoring the thread for new things to try the next time I’m out that way.

I’m currently at BlizzCon, but I’ve prepared some posts ahead of time (including this one), so my series of Guides to Elite: Dangerous will still post at their regularly scheduled times on Wednesdays while I’m away.