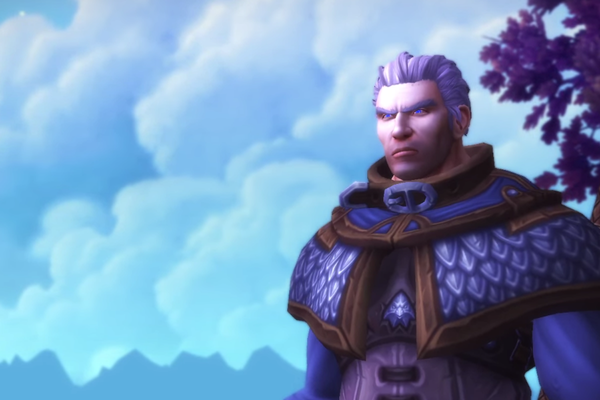 World of Warcraft: Warlords of Draenor Patch 6.2 – Fury of Hellfire launched about a month ago, bringing with it Shipyards, Tanaan Jungle, the final raid, Hellfire Citadel, and a host of other things. One item in that host was the Dreanor Pathfinder achievement, which will unlock flying in Draenor in a future patch (which we now know is Patch 6.2.2, currently on the PTR). When I first heard about this meta achievement my expression and attitude was not unlike Khadgar’s above. I was so disgruntled by the whole flight issue because, dammit, I have a lot invested in flying mounts and I wanted to fucking use them, that I logged in the day the patch dropped, picked up the quest to start construction of my Shipyard, and then promptly logged out. I didn’t log back into WoW for almost two weeks  after that (I was kind of busy in The Secret World anyway).

Sidebar on my thoughts vis-a-vis the issue of flying mounts in World of Warcraft: WoW has had flying mounts since the first expansion, The Burning Crusade; it is not a new thing the developers are having to consider when designing content. A lot of money and time has been invested by the player base in acquiring flying mounts. To simply not allow flying is lazy design and development. Better to incentivize ground travel (through fun toys, achievements, treasures, etc. that are easier to see when on the ground), and to design your zones and quests around the idea that players might fly in (anti-aircraft gun emplacements, flying patrols, heavy fog that obscures the ground, etc.). I’m fine with grounding folks until they hit max level for the expansion, that’s a mechanism that’s been in place since BC, but attaching the ability to fly to an arduous grind is lazy and almost vindictive. There, I’ve said my piece and counted to three.

Eventually, when I had a bit more free time, I went and actually looked at what the Draenor Pathfinder achievement entailed. WoWHead actually has a handy little tool that summarizes the whole thing and gives you a progress report and links to guides. I was astonished to find that I was already quite far along in completing the achievement. This spurred me to try to finish it, despite still needing to grind out three separate reputations. I quickly discovered that it wasn’t going to be nearly as bad as I’d first thought, and I’ve decided to put this post together with some of the things I used to make it easier.

The first thing you’ll have to do is pick up and follow the Shipyard building quest chain; it’s the only way to get to Tanaan Jungle where the three reputations you’ll have to grind are: The Saberstalkers, Order of the Awakened, and Hand of the Prophet. If you’ve leveled through Warlords of Draenor via questing, and cleared and explored each zone as you went along, most of the other pieces of the achievement should actually already be done, so you’ll be spending all your time in Tanaan Jungle anyway. The Shipyard also appears to be required to complete the Legendary quest chain so, again, might as well build it. I won’t cover the Legendary quest chain in this post, but look for a future post when I finish it. 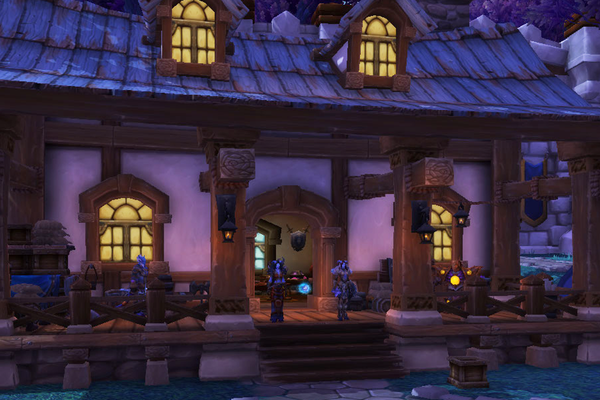 Once in Tanaan Jungle you’ll follow a few more quests in the chain until you eventually reach Lion’s Watch (Alliance) or Vol’Mar (Horde). This is the daily quest hub for Tanaan Jungle. Before getting started in earnest, there’s a couple of things you might want to do. First and foremost, because much of the Draenor Pathfinder achievement involves grinding reputation, you might want to build yourself a Level 3 Trading Post in your Garrison. This will give you an extra 20% on all reputation gains. It might not sound like a lot, but it made a huge difference for me. Second, pick up the HandyNotes add-on and the HandyNotes_DraenorTreasures plugin. These are invaluable both for completing the Treasure Hunting portion of the meta achievement, and the Tanaan Jungle dailies. 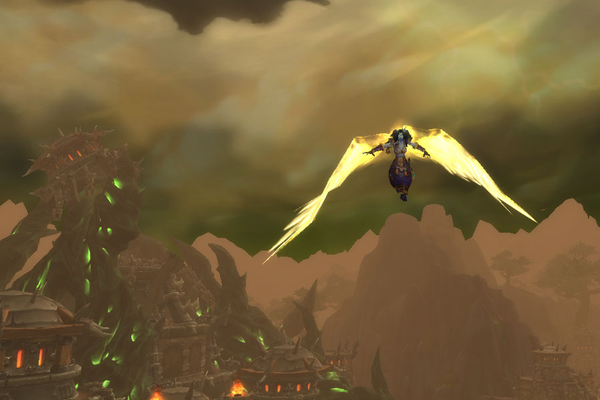 The next thing you might want is Aviana’s Feather. This is an item reward from one of the Inn dailies in your Garrison. It basically allows you limited flight, every 15 minutes, and I found it invaluable in getting around Tanaan Jungle. I used it to swoop down on hard to reach treasures and to zoom back to the quest hub instead of having to run to the nearest flight point. That said, the flight points are actually pretty well positioned, and one of the first quests in the Tanaan Jungle chain takes you on a tour of them, so you should have them all pretty early on. 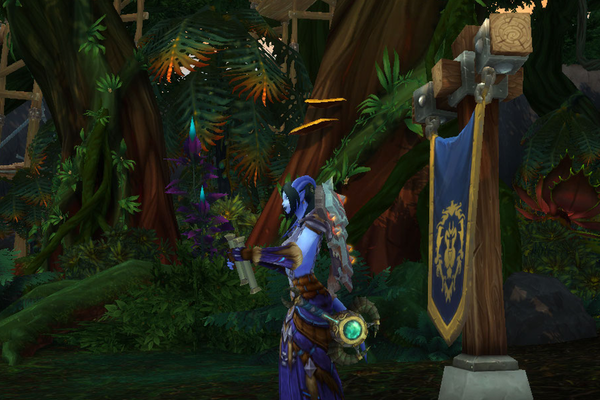 With all those things in hand, you should be all set to embark on your grind toward Draenor Pathfinder. Here are few notes on the dailies to help you further. There is a series of new Garrison Campaign weekly quests in Tanaan. Your faction hero should have it for you at the start of each week (on Tuesday). There are six total, and there are a few treasures that are only accessible while on these quests, so keep your eyes peeled. Initially, each day, you’ll have three quests available: one on the map table inside the Inn at your quest hub, and two outside (one of which is random). Completing the map table daily will unlock two more dailies from a quest giver in the Inn each day for a total of five dailies each day. These dailies, with the exception of one random daily from one of the quest givers outside the Inn, only award reputation for Order of the Awakened and Hand of the Prophet. 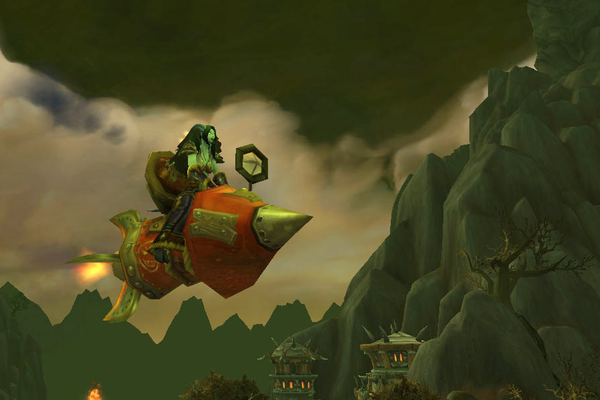 To gain reputation with The Saberstalkers you have to kill elite Saberon in Fang’rila. I advise making use of the Group Finder (if you don’t have a premade group); there are almost always groups grinding rep in Fang’rila. There is also a weekly in Fang’rila, which you can pick up from Z’Tenga the Walker just outside the zone, that nets a big chunk of Saberstalkers rep. To complete it you need to buy a Prime, Major, and Minor Blackfang Challenge Totem from Z’Tenga, go to the summoning area, summon each boss in turn, and defeat them. There are usually groups of people just waiting there, or already summoning them (in which case you won’t need to totems). Just hit the boss at least once and you should get credit.

Finally, HandyNotes will show you the locations of all the treasures as well as the spawn points of all Tanaan Jungle rare mobs. One of the dailies requires you to collect 10 Fel-Corrupted Apexis Fragments. These fragments are dropped by rare mobs and are also located inside Tanaan Jungle treasures. An important note, though: they can only be looted from the treasures if you are on the Unseen Influence or Unknowable Power quests. If you’re not currently on either of those quests, the treasures will only drop from their original loot tables. This is important because the treasures in Tanaan Jungle are a handy way to get the Fel-Corrupted Apexis Fragments, are instantiated to each player, and can only be looted once. Most days, I would run around doing the other dailies, killing any rare mobs I came across (I actually found the Hunter’s Seeking Crystal sold by Dawn-Seeker Krisek useful in finding rares, but I’ve read others haven’t so YMMV), and looting the fragments from them. Then when I was done, if I needed a few more fragments, I would hunt down the nearest treasures and make up the difference there. Once you complete the Draenor Pathfinder achievement you can always go back and get the rest. There are a lot of neat toys in them; a few of which are disguises, as seen above.

With the Level 3 Trading Post, and Aviana’s Feather, I managed to hit Revered with all three Tanaan Jungle factions in about two and a half weeks. That’s right … Revered. You only need to hit Revered with each faction in order to complete that portion of the Draenor Pathfinder achievement. All in all, it wasn’t all that terrible. I was lucky enough to be accompanied by Mogsy and her husband Rich for most of my Saberstalker grind, so even that part was fun. That said, I still stand by my sidebar. I hope the information here helps you on your way to flying in Draenor.