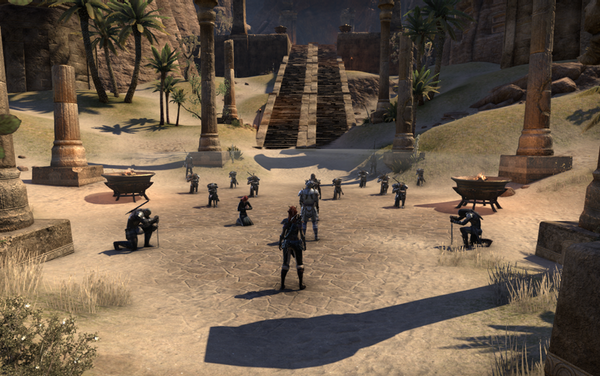 Zenimax Online seems hell-bent on testing the far limits of their players’ combat abilities. Much like the Mannimarco fight, the fight against Septima Tharn at the end of the To Walk on Far Shores quest line in the Daggerfall Covenant controlled Bangkorai seems impossible almost right from the start.

The quest leading up to it actually sets the tone, as you move through the cramped corridors of the Halls of Heroes. Fighting the Harvester Daedra in these halls makes destroying their little healing orbs nearly impossible as they spawn so close to the Harvester. Usually I have no problem killing them, as an archer, but in the Halls I died several times due to poor placement. When I could, I would line-of-sight them to a better position, but the quick respawns of all the mobs in the Halls make this a hit or miss tactic. Stealth saved my butt more than once when I opted to just sneak past a Harvester rather than face her. 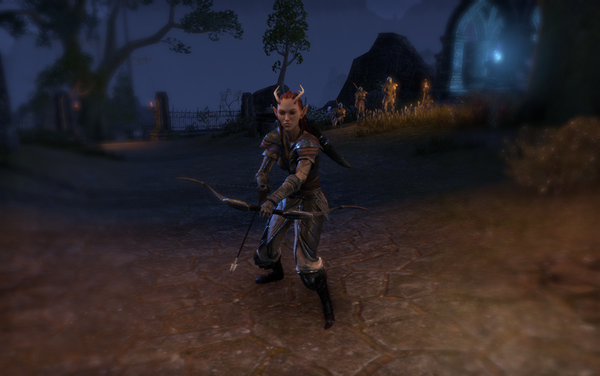 Once you reach the Far Shores, things become deceptively peaceful. There are no mobs in there whatsoever, at the start. You’ll make your way down a long mountain path and across a wide courtyard (ominously perfect for a boss fight) surrounded by water with a platform at the far end. On this platform you will find Septima Tharn and the soul of King Emeric. After watching a short discussion between the two, Septima ports to the courtyard and shit gets real.

The start of the fight is pretty tame and I was actually lured into a false sense of security the first time. I ran with the same build I used against Mannimarco, and things were going good. Then Septima ported to the top of one of the large pillars and summoned a metric fuck ton of adds. These adds aren’t as squishy as the adds in the Mannimarco fight, and, though they come at you in waves of three, if you remain in the courtyard to face them you will quickly become overwhelmed … especially once the archers come forward.

I switched up builds a few times to no avail, and then I eventually went back to the Mannimarco build and decided to see how I might use the terrain to my advantage. What finally worked for me was to engage Septima in the courtyard, but as soon as she would port to summon her army of the dead I’d run up onto the platform, where King Emeric still was, and position myself behind the big statue there (putting it between me and the hordes of the dead). This meant that for most of the fighting the archers couldn’t reach me. It also, because of the path the adds use, gave me plenty of time to kill each wave of three before the next wave came. Once all the melee adds were dead, I’d come out and plink off the archers. Rinse and repeat till Septima is dead.

I’ve read that having a few AoE attacks really helps here also (and a self-heal is a must) but, if you’re like me and don’t have many, this might be the best tactic. I don’t really feel like it’s an exploit or a hack or a cheat, because many famous battles have been won, throughout history, by using the terrain to funnel enemies. Hopefully Zenimax Online sees it the same way (hello, Sparta’s Three Hundred).

Its seems, from other things that I have read, that fights like this (and worse) become the norm in the Veteran levels. Oi.