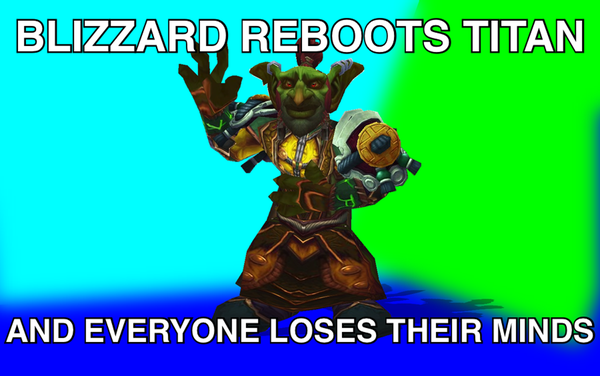 Yesterday’s announcement (which originally started as rumor but was later sort of confirmed by Blizzard in their usual taciturn way) seemed to light a mild wildfire in the MMO community. The very idea that all this noise was generated by Blizzard, a company notorious for restarting projects, rebooting what amounted to a line item on a financial report is astonishing to me (there have been no details what so ever, not even a single screenshot of Titan).

This rumor, turned sort of fact, brought out all the haters and armchair analysts who, for the most part, seemed to think this spelled doom for Blizzard as a company. I honestly don’t know where these whackadoos get their ideas. The company has three franchises that are, by anyone’s definition, both critical and financial successes. WoW is just their big cash cow. And, man, is she a pretty cow.

Let’s do some simple math here: assuming every single one of the current 8 million subscribers to WoW choose to pay on the 6 month plan, that’s ($12.99 * 6)2 = $155.88 per subscriber per year. Multiply that by 8 million and you get $1,247,040,000 in annual revenue with WoW at its lowest subscriber number in years. 1.2 BILLION dollars in subscriptions on one title for a company that has three wildly successful titles, a vibrant cash store with both virtual and real chachkes, a couple of toy lines, books, comic books, a movie in the works … the list goes on. Yeah, poor Blizzard is doomed. DOOOMED.

So, let’s go ahead and just stop saying that Blizzard is doomed, that WoW is doomed, that the sky is falling; it’s not. It won’t be for a good long while. Just sit and think about what this news really means.

Titan showed up as a line item on a yearly financial report back in 2007. Amidst all the speculation that immediately followed, Blizzard confirmed that it was a Next-Gen MMO, it was a new IP, they had their best and brightest on it, and that it would be able to co-exist with WoW. In 2011 they announced that the dev team had achieved a playable version of the game. Those were all the details: no screenshots, no teaser videos, no concept drawings, not a single detail on what the hell this new IP even was … not even a hint as to the genre. Now they’ve announced that they are retooling this phantom game.

A little history here might be useful. Diablo III first began development back in 2001, but wasn’t actually announced until 2008. It didn’t release until mid 2012. That’s a total of 11 years during which the project went through three reboots/retools/revisions. Blizzard‘s track record with every single one of their franchises follows a similar road map. By that map, Titan (whatever the hell it is) is right on track.

Most of the armchair analyst now worry that we’ll see nothing of Titan until 2016. Frankly I think that’s a little optimistic. It’s only been 6 years since the line item showed up. But, for me, this is all really good news. The MMO landscape has changed so much since this rumor first appeared, back in 2007, that it only makes sense for Blizzard to retool the whole thing lest they repeat Bioware‘s mistake. This means they are watching the market. This means they are listening to the sorts of things players have grown to want in the last 6 years. This means that whatever Titan ends up being will be better than what it was planned to be 6 years ago. And, as the math plainly shows, Blizzard has the financial freedom to move with the market.

There’s a new expansion on the horizon for WoW. Starcraft II had a recent expansion, which is only the second installment of what is likely a 3 act story. Diablo III is just getting started, and Hearthstone is still in beta. There are tons of things coming from Blizzard in the next several years, and if you don’t like any of that stuff, hey look! There’s a whole, huge, wide, diverse market of MMOs to play while you wait to see what the hell Titan is. If you’re still alive then, that is. Blizzard will be.