I’ve held off talking about this for a really long time, mostly out of fear of jinxing it and it never seeing the silver screen, but with the Warcraft movie now in post-production, and having been teased at this year’s ComicCon, I feel comfortable enough talking about some of the things rolling around in my head about this project.

Very little has been confirmed about the story line the film will tackle, but a few things have been confirmed by director Duncan Jones. Firstly, we know that the film will be an origin story involving Orcs and Humans and specifically featuring Anduin Lothar and Durotan. Mention of Khadgar and a confirmed role for Ben Foster as Medivh have also come to light.

There has, of course, been all sorts of speculation about the roles the confirmed cast will be playing as well as exactly what story will be told, but based on what’s already been confirmed I think it can only involve the opening of the Dark Portal just prior to the First War.

The casting of Paula Patton, the film’s only confirmed female character, I think fits really nicely into this idea and actually may narrow it down to Lothar‘s assault on Karazahn. I say this because if you are casting a High Elf or Jaina Proudmoore, you’d probably go with a different actress. But, if you’re casting Garona Halforcen, then Ms. Patton is an excellent fit. Arguably she could also be playing a Night Elf, perhaps Tyrande Whisperwind, but the Kaldorei don’t feature prominently in the First War, so I think that’s a no-go. Garona, on the other hand, has many encounters with Lothar and Khadgar, and is even romantically involved with Medivh. 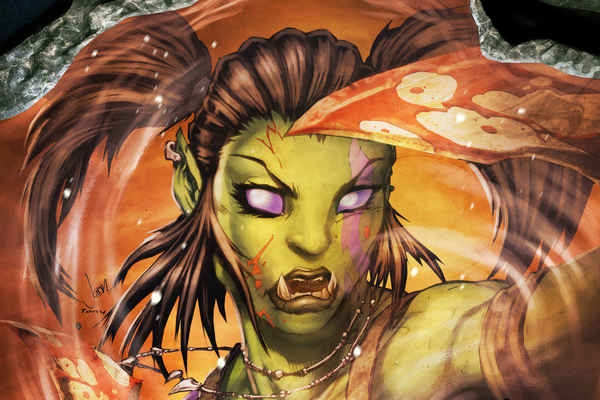 This idea, though, kind of leaves Durotan out in the cold (pun intended). As one of the only Chieftains to refuse the Blood of Mannaroth, Durotan is exiled. He actively campaigns against the Orcs, and even assists Doomhammer in his war against Gul’Dan and the Orc Warlocks, but he has little to no interaction with Lothar, Medivh, Khadgar, or Garona. I honestly don’t know where he fits except perhaps in a parallel story arc that shows the unrest among the Orc ranks. All that said, I think I can safely make some predictions about who is playing whom.

As I said, I’m fairly certain Paula Patton will play Garona Halforcen. Given my speculation on the timeline, I think Clancy Brown will probably play Lothar; Lothar was already greying by the time he attacked Medivh in Karazahn. I’m liking Dominic Cooper for Khadgar. Khadgar is still young until he kills Medivh and is cursed with age and frailty, and I really like Travis Fimmel for Durotan, so I can’t see where else Cooper fits. There are a host of other male actors in the confirmed cast (seriously, the movie is a sausage fest), so I could be way off base on the above, but I feel pretty comfortable with it.

So, there it is. I predict the movie will cover the corruption of the Draenor Orcs, the opening of the Dark Portal, and the subsequent attack on Karazahn, with Paula Patton as Garona Halforcen, Clancy Brown as Anduin Lothar, Dominic Cooper as Khadgar, and Travis Fimmel as Durotan. We only have a little over a year to wait to find out how far off base I am. Heh.