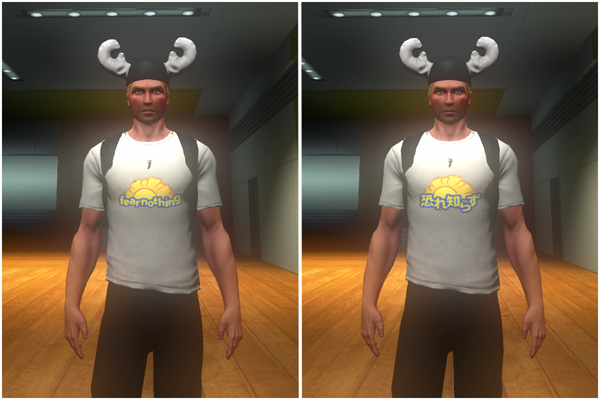 Last week Syp mentioned that he’d seen some players running around with Fear Nothing Foundation t-shirts on. Never being one to pass up a chance on some new duds in The Secret World, or any MMO for that matter, I just had to find out where one would acquire such fine examples of haute couture. I didn’t have to look far. Sephora’s Closet II always has the latest scoop on all the new TSW fashion.

As it turns out you can get your grubby mitts on these sweet middies during The Pachinko Model story mission. During tier 4 of the mission, after you’ve turned the lights on and unlocked the doors on the first floor, you’ll find yourself in a locker room just off the exercise room with all the stationary bikes. You’re in this room looking for a password, but what I hadn’t realized before is that the lockers that you can interact with are random; the t-shirts can be found in the same two lockers, but those lockers aren’t always clickable on each mission run. Enter instancing to the rescue.

After you’ve turned on the lights and unlocked the doors, go check all the clickable lockers. If none of them have the t-shirts you’re looking for, run out of the Fear Nothing Foundation, back out to the street, and re-enter. You’ll have to fight a single mob in the common area with all the tables and chairs each time you do this, but the lockers that are clickable will be different each time. The lights will still be on and all the doors will still be unlocked when you re-enter. Once you get the t-shirt or t-shirts you want, grab the password (if you don’t have it already) and continue with the mission.

It took me about six resets to get both t-shirts during a single run of The Pachinko Model. Not hard at all. So, what are you waiting for? Go get yours!