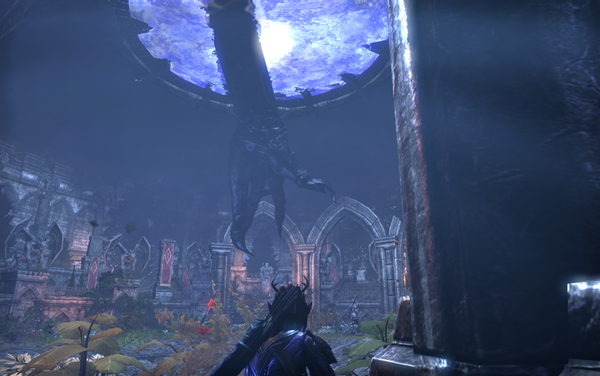 As my regular visitors may have, no doubt, noticed, I haven’t really posted anything about The Elder Scrolls Online since my first, and last post, a few weeks ago. This is due, in large part (and I know I may get some grief over this), to the fact that, for me, nothing really exciting or post-worthy has happened in the game. It’s not for lack of playing, mind you. I currently have a level 42 Bosmer Nightblade (Bow specced), a level 10 Imperial Templar (Two-Handed specced), and a level 7 Orc Dragonknight (Destruction Staff specced). I’ve played quite a bit, but mostly I feel like I’m just marking time in this game until Wildstar and Issue 9 of The Secret World launch. It hasn’t, in all that play time, grabbed me with anything I haven’t seen elsewhere. The game is gorgeous, the combat is engaging, but honestly, the story falls flat for me. It doesn’t live up to, in my mind, the epic story of its forebearers in the franchise. All that said, though, something exciting did happen last night. 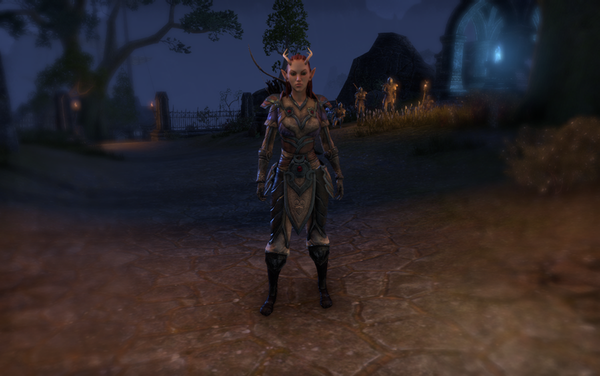 Last night I tackled the Shadows of Sancre Tor Main Story quest with my level 42 Bosmer Nightblade, Tennaea (yes, she has antlers … because it’s cool). Up to this point I’d encountered moderately challenging content, but nothing to write about. Having invested a couple of points into Siphoning, I’ve been able to survive most fights, despite running exclusively Medium Armor, with little to no problems. Even the first parts of Sancre Tor weren’t a problem, so I’m not going to even cover them. Then, I reached Mannimarco. What a bastard.

I tried this fight three times before I nearly tossed my monitor out the window. If you’re hoping for Titainborn, Sai, or Tharn to be of any use in this fight, they aren’t. In the fights leading up to this one they hold aggro nicely, but in this one Mannimarco seems determined to kill you and you alone. This is likely because the sole purpose of the Companions, in this fight, is to block the portals that pop up slowly leaving you to face Mannimarco alone anyway. They don’t even join the fight right away, and even when they do their damage is negligible.

The first three times, I died very quickly and was soon out of resources for my big hits. Once of the things that killed me the quickest was this siphoning attack (a wriggling blueish-white beam) that Mannimarco uses that eats up health like a mofo. He also has a massive AoE he casts now and again, and he will summon adds each time he opens one of the portals the Companions are there to block. Did I mention he has a huge amount of health? Anyway, instead of breaking my rig, I took a few deep breaths and turned to the all-mighty Google for answers. I found a lot of complaints concerning this fight. Undaunted, though, I took in what I read and boiled it down to this:

With the above in mind, I restarted the fight and took him down in about 3 minutes with 85% of my health still on the bar. This fight is about outlasting Mannimarco and knowing how best to use whatever skills you’ve unlocked. As a Bow specced Nightblade I continuously plinked him with my Basic Attack and hit him with Swallow Soul IV about every 5-6 shots. When he started his siphoning attack, I’d hit him with Venom Arrow IV to interrupt it and poison him as a bonus. I’d dodge the AoE when he’d  cast it. When he stopped to open a portal and summon adds, I’d hit the adds with Acid Spray I to snare and poison them, then finish them off with my Basic Attack. At that point it was rinse and repeat.

I have to say this fight was the most fun I’ve had in the game so far, apart from the couple of Dungeons I’ve run with friends (those were a blast). I’ve heard PvP is a lot of fun, but PvP isn’t my thing so I wouldn’t know. I don’t know if this one thing will be enough to keep my playing once Wildstar and Issue 9 of The Secret World launch, though. In any case, I hope the tips above help you kill Mannimarco if you’re having trouble.