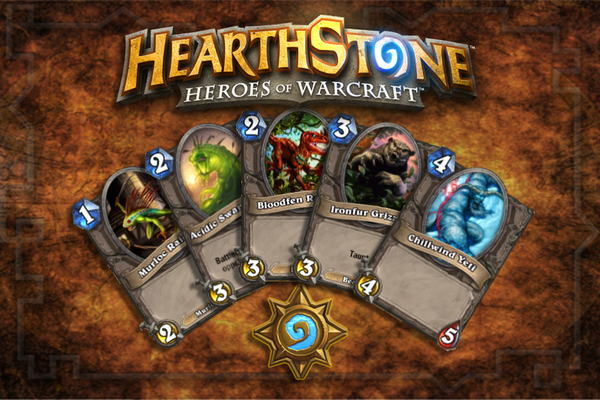 A few days ago, I posted about some of the strategies I’ve been employing both in Play mode and in Arenas. I’ve gleaned most of this from the videos that Adahn Ko, Gnimsh, and Zisspire have posted on YouTube. I’ve been having quite a good bit of success, when RNG wasn’t bashing me in the face, so I thought I’d mix all their sauces together and render them down here into a savory goulash of tasty tips and tricks that are much more accessible than trying to watch several hours of videos. I still highly recommend watching their videos but, herein I hope to present the highlights. I’ve also decided to split this post in two because, while I’m attempting to be as concise as possible, there’s still a lot to cover. Without further ado, here we go.

Know the Cards: Gnimsh really harps on this. And, it’s not just knowing the cards in your deck or in your hand, we’re talking all the cards. Gnimsh recommends going through your card collection in crafting mode (so you can see the cards you don’t have as well), or going to sites like HearthHead.Com, and reading through all the cards. For me, that’s a little overkill; I’m not looking to be a Gran Master or anything, just to be competitive enough to have fun. As such, my recommendation is PLAY! Play all the classes in Casual Play mode. Win or lose, you’ll be getting exposed to a lot of cards. If you see a card played that you’re not familiar with, mouse over it and read it. The good thing about this method is that you’ll be getting exposed to the meta game as well; the cards people play most often.

Know the Classes: Again, another of Gnimsh‘s tips. Every class can be competitive, and since the  class choice in Arena is somewhat random, it’s good to know how to play all of them. Again, my advice here is PLAY, as above. Playing all the classes will give you insights into their strengths, weakness, and mechanics. Knowing these things, coupled with knowing the cards, will give a good chance of being able to predict, with no small measure of confidence, what your opponent might do at any given stage of the game. I play all the classes as Daily quests demand. When I’m not doing a Daily, I focus on three classes so that in the Arena draft I have a pretty good chance of getting at least one I’m really familiar with.

Not All Minions are Created Equal: Both Adahn Ko and Zisspire talk about this a great deal in their videos. There are certain baselines to look for, when choosing minions, with respect to Mana cost versus Damage and Health stats. Generally speaking you want a 1/2 ration, meaning that the total stats (Damage + Health) should be double the Mana cost. In most cases you should also favor Damage over Health. Below I’m going to present the median Minions from the Basic deck for each Mana cost tier from 1 – 4. What these Minions represent is the ideal cost to stats ratio for each tier. There are Minions in each tier with both better and worse stats (especially among the Expert, Rare, Epic, and Legendary cards), but these Minions are the ones to use as your basis for comparison. 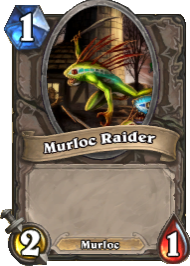 1 Mana: As far as 1 Mana Minions go, in the Basic deck, there isn’t a whole lot of choice. For the stats you get for that 1 Mana, though, there isn’t a much better choice than the Murloc Raider. For 1 Mana you get a 2/1. This means if he survives until your next turn, he can trade for a 3/2, like an Acidic Swamp Ooze, a Bloodfen Raptor, or a Faerie Dragon. He can even trade for the dreaded Shattered Sun Cleric, if your opponent Coins or Innervates and plays one on their second turn. The Leper Gnome is a superior choice to the Murloc Raider, because of his Deathrattle, but if you don’t have one, go for the Murloc Raider. There are definitely better choices among the Epic cards, as well as Rares, but if you don’t have any of those then embraces this moist Minion. He won’t do you no harm. 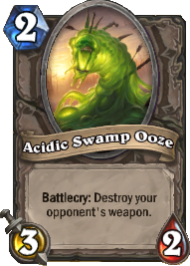 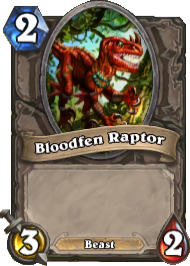 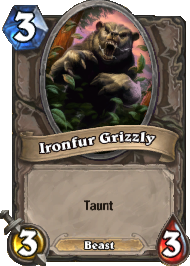 3 Mana: Once again, at 3 Mana in the Basic deck, we have quite a lot of choice. The IronFur Grizzly tops out the Mana cost to stat ratio at a healthy 3/3. He also has a Taunt. The Shattered Sun Cleric is also a 3 Mana cost card and is truly a must have; even though her stats aren’t great, her Battlecry more than makes up for it. Given the choice between the Ironfur Grizzly and the Shattered Sun Cleric, I always pick the Cleric. The Razorfen Hunter is also a decent choice because of her Battlecry; she’s  basically a 3/4 for 2 Mana and will almost always trade 2 for 1, meaning your opponent will likely have to sacrifice 2 minions to take her and her Boar out. The Wolfrider is also not bad because he has Charge and can therefor deliver 3 damage immediately when played. Again, we’re talking about direct Board Control here. 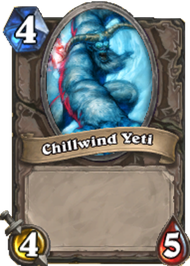 4 Mana: At 4 Mana, in the Basic deck, we have the end-all-be-all of Mana cost to stat ratio Minions in the Chillwind Yeti. There is a reason this bad boy is in almost every deck you’ll face in Hearthstone. For 4 mana you get a 4/5 minion that will almost always trade 2 for 1, and at 5 health he can survive things like Lightning Storm, and even the hated Flamestrike, not to mention most other direct Damage Spells that often do 3 – 4 Damage. Sen’jin Shieldmasta (TAZ’DINGO!) is also a good choice, if a little weaker on the Damage output. His Taunt makes up for it, though. And there is also the Dragonling Mechanic; with her Battlecry she’s essentially a 4/5, but she can often fall victim to some of the aforementioned AoE spells, so she’s not the best. Definitely always try to have at least one Chillwind Yeti.

Now, these aren’t the end all be all of Minions. I offer them here as guidelines and as a way to demonstrate the very important concepts of trading Minions and Mana cost to stat ratio. Ideally you always want to be making 1 for 1 trades when establishing and maintaining Board Control (1 for 2 or more is even better) and you want to force your opponent to make 2 for 1 trades. Playing minions that deal enough damage at their Mana cost to make 1 for 1 trades for Minions at the next Mana cost tier is one good way to accomplish both things.

At all of the Mana cost tiers mentioned above there are many other Minions with poorer Mana cost to stat ratios, but who offer some other really valuable ability. Card Draw comes to mind and is something you always want to have in your deck (Novice Engineer and Gnomish Inventor). Once you start getting Expert, Rare, Epic, and Legendary cards there are even more choices. The above should help you make more educated ones, though. The things to ask yourself when contemplating a card are: Are the stats I’m getting for the cost of this card good, and if not, does whatever extra I’m getting with it help me establish and maintain Board Control or finish my opponent?

You’ve no doubt noticed I didn’t go into Minions above a Mana cost of 4. Adahn Ko is of the opinion, and I’ve seen it proved true since I’ve been incorporating his strategy, that Minions of a Mana cost of 5 or more aren’t generally desirable unless they have some ability that does direct Damage, such as the Fire Elemental‘s Battlecry, or offer something that is immediately applicable towards Board Control, such as Charge, or buffing Minions that are already out and can attack that turn. Even when you do pick Minions at these higher costs, you should only have one or two of them. In fact, the 5 – 7 portion of your Mana Curve should be where things are tapering off. These are where your finishers are. Having a ton of them in your deck won’t help establish Board Control early on, or do enough to-the-face damage to your opponent to make finishing them even possible. As an example, in my Mage deck, I have 1 Pyroblast; if I haven’t done enough damage to my opponent by round 9 or 10 so that the Pyroblast will finish them, I’ve probably already lost the match.

Tune in next time for the second half of this article, where I’ll offer a bit more on Minions as well as a handful of more general but useful tips and tricks.