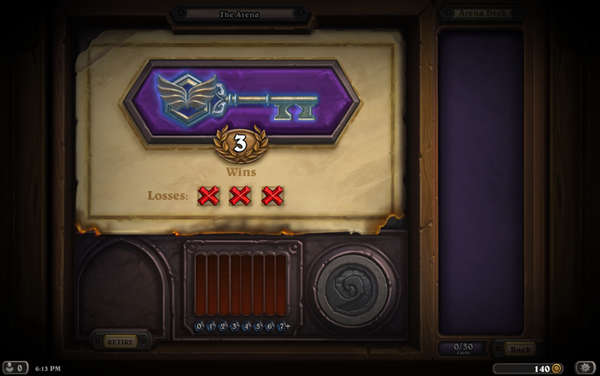 Following my own rules for how to perform better in Hearthstone, I’ve been doing much better these days in both Casual and Ranked play. However, attempting to apply those same rules to Arena play has repeatedly been a losing proposition. Since I started playing Hearthstone I’ve entered the Arena perhaps eight times and have never done better than 2-3; usually I’d come out 1-3 and more often than I’d care to admit I’d come out 0-3. This morning I fired up the Arena again determined to really focus on my strategy, because perhaps I just wasn’t doing so before. When I quickly hit 0-2, I stepped back and began scouring YouTube for some Arena specific videos to see what I was doing wrong. It paid off; I racked up three victories in a row, finally breaking that two victory ceiling, before I got my final strike and was out. 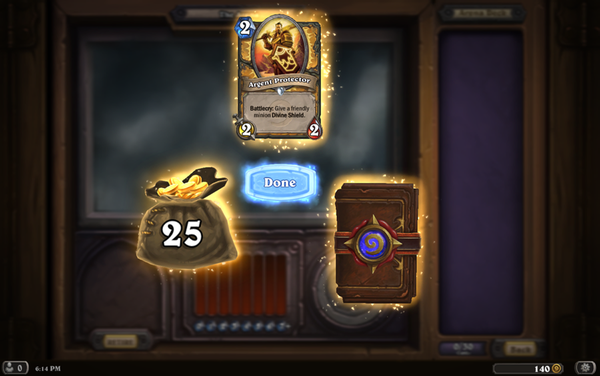 While, admittedly, 3-3 is nothing to throw a parade about, for me it was huge. Considering those three wins were racked up in the eleventh hour, it was even more so. I have to credit Adahn Ko, Gnimsh, and Zisspire for the turn around in my success. All three of them have some really fantastic videos that explain far more than I could ever fit here in a concise enough manner that anyone would bother reading. The videos themselves are long, but well worth watching. Particularly helpful to me were Adahn Ko‘s video below, where he shows you how to build a winning deck, and his follow up where he shows you how to play it.

Gnimsh was also very helpful. He has a four part video series that goes over a lot of meta information: things to think about, best practices, advice and tips. The first video in the series is below, and you should be able to get links to the next three at the end of it. Again, they’re long, but they’re loaded with valuable information.

Lastly, Zisspire has a video up where he actually coaches another player, via Skype, through the draft and playing the deck they build together. There is a lot of really fantastic discussion between the two as to what to play when, why one play would be better or worse than another, etc. That video is below.

With Adahn Ko, Gnimsh, and Zisspire‘s advice in mind, I jumped back into my 0-2 Arena. Freshest in my mind were Adahn Ko‘s videos, but I also tried to keep what I could remember of Gnimsh‘s tips and advice in the forefront of my mind. One of his best tips was to take a screenshot of your deck before you hit play. You never really get to look at the whole deck spread out, once you start playing, so this made so much sense I was floored that it had never occurred to me. I took two shots and combined the whole card roster into one image, showing the class I’d chosen, so that I had it as a reference. It was very helpful to be able to look back at it and remember what I had in my deck so that I might make better plays while anticipating things I might draw next. If you take long breaks between games in Arena, it’s even more valuable as a reminder of what you have at your disposal. 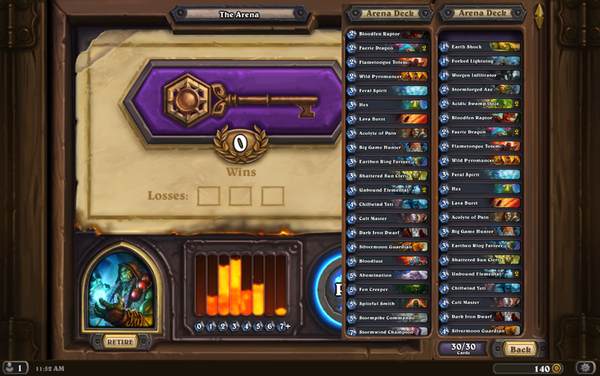 Now, granted, this deck wasn’t built using Adahn Ko‘s techniques — I’d but it together before I’d watched that video — but, it was close enough (minus having a lot of spells that I probably didn’t need) that I thought I’d do alright with it. And I did! Three wins in a row! 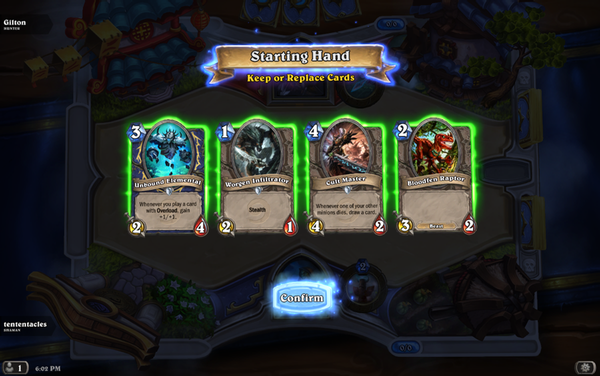 Admittedly, Adahn Ko‘s technique is just one way to do it. Having played a little over a dozen Arena matches now, and seen what others are doing, I can tell you that not everyone does this; a lot do, but not everyone. For me it plays right in to the way I like to play anyway. However, instead of relying on spells for removal, it relies heavily on having tons of minions at 2, 3, and 4 mana, and making effective trades with those minions for removal until eventually you can overwhelm your opponent with a full board of slavering damage dealers. It also relies on having something to play every turn. The image above illustrates a textbook initial draw where I had at least one thing I could play for the first four rounds, with reasonable confidence that I would be able to evenly trade them for whatever my opponent might play.

I’m looking forward to applying what I’ve learned the next time I head into the Arena. Hopefully I’ll be able to draft a deck that with do even better.