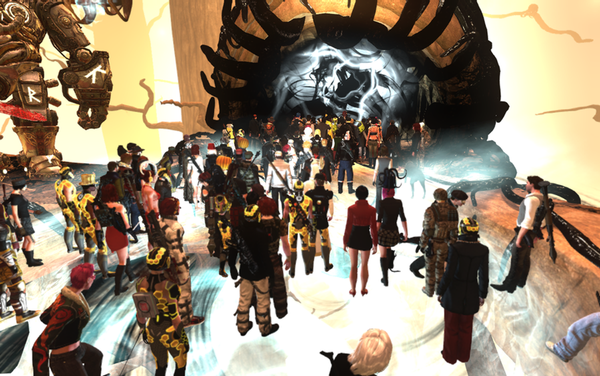 Like legions of multicolored sperm, hosts of Bees banged against the Filth egg that is the portal to Flappy’s domain. Such was the scene minutes before the portal opened last night, and the Knights of Mercy were in attendance for this week’s Secret Monday. We’d heard that if you were in a group or raid before entering the portal you would all be transported to the same instance of the Flappy fight. This turned out to not be the case as we were actually split across three separate instances. Still, with all of us in TeamSpeak, it still felt like we were all together and that’s what really matters.

If you’re interested in my full report of the Bird of the Zero-Point Pathogen (Flappy) fight, you can read it here. It was definitely a whole different experience hearing everyone’s shouts of glee and screams of terror in TeamSpeak, and that made it a much more fun experience than I’d had earlier in the day. I should note that I had a blast earlier. 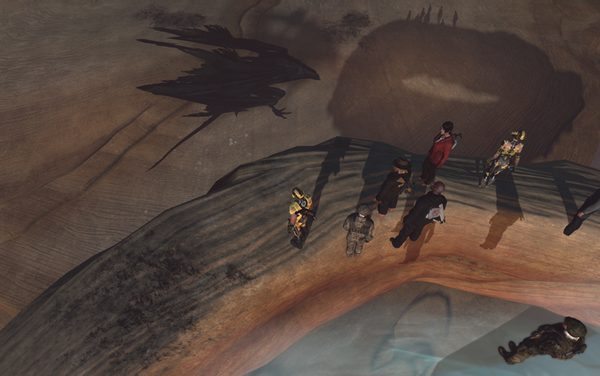 Having more eyes on the fight than just my own also filled in some mysteries. I’ve edited my original article, so I won’t go over them here, but I have to say that this fight is probably the most rewarding, most challenging, most bug-free world boss fight I’ve experienced in The Secret World and probably any other MMO I’ve ever played. It’s a frenetic dash and scramble for nearly a solid twenty minutes that puts pretty much every skill you should have been honing to the test. It is most definitely a worthy cap on the event and a signal of things to come in Tokyo.

I expect KoM will be running this a lot more, both as a group and on our own. Though I’ve completed my Carapace of the Immaculate Machine (and wore it all last night), there are still all sorts of goodies to get and achievements to complete before it’s all over; I expect it won’t be over for a bit yet because, as of this morning, there were still ten Tendrils of Dis up.

So get cracking, my happy little Bees, and join the fight!