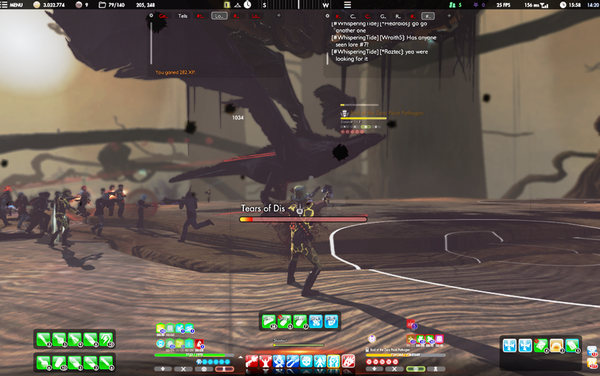 Flappy, that incontinent, IBS afflicted, four winged terror of Agartha has finally deigned to face the wee Bees trying to keep the World Tree green. It seems as though he’s been spending all of his time dining at Taco Bell, because his Hershey’s Squirts are worse than ever; it’s a big Filth sandwich and everyone’s going to have to take a bite.

In all seriousness, the fight itself is all about avoiding all the creative ways in which Flappy spreads the Zero-Point Pathogen around the platform. There are also lots of adds that wonder around, so it’s a good idea to keep those off of any healers you notice getting pummeled. Mostly though, stay out of the goo. It will all mostly one-shot damage dealers and healers.

He has a 180° frontal cone. He also shoots Filth out of his hind end in random streams in a pattern like a peacock’s tail. Now and again he’ll do Tears of Dis, which is Filth bombs randomly all over the platform. Every once in a while he’ll take to the air and rapidly strafe the platform at random locations. Stay out of the telegraph. I’ve had some luck with running towards the last place he staffed, but he will sometimes strafe the same spot so your mileage may vary. Lastly, he does Heat Death of the Universe; he’ll move to the center of the platform and a black maelstrom will start to swirl around him. When he does this, run off the closest edge of the platform.

All three times I’ve done this fight so far, Flappy has reset to full health at a seemingly random point during the fight. I don’t know if this is a bug, or some mechanic I can’t figure out. Still, stick with it and he will eventually go down.

EDIT: This apparent ‘reset’ was happening because we were ignoring Zuberi’s warnings. When he calls out, you need to jump off the main platform, which will take you to the platform above. There Zuberi will assist you in killing a secondary boss that will heal Flappy if left untouched. So, listen for Zuberi.

EDIT (02142014 1356 EDT): Having about 4k health is helpful overall in this fight, but especially when fighting She Who Walks Outside. Any less and Zuberi has trouble keeping you healed. 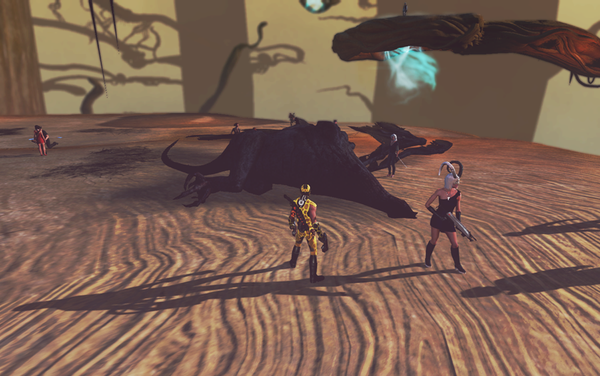 I should mention that, so far, two of the three missing lores have been found: 6 and 8. Lore 6 is located on the platform above Flappy just before you jump down to engage him at the start of the fight. Lore 8 appears randomly in the center of Flappy’s main platform. No one, as yet, is admitting to having found Lore 7. 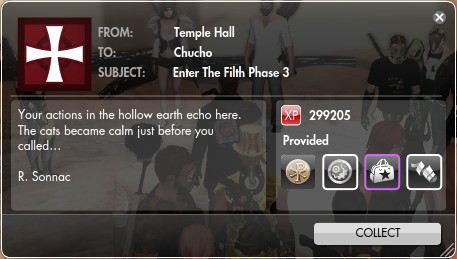 The rewards for Enter the Filth Phase 3 include 100 Extant Third Age Slivers, a Writhing Bladder Sac, 6 Extant Third Age Fragments,  and 15000 Pax. The quest is on a one hour cooldown and you will not receive a reward if you kill Flappy again within that hour. Much like the Holiday and Golden Weekend bosses, everyone who participates gets a reward (as long as they aren’t on cooldown), and you can bounce between Dimensions to do more than one Flappy. Keep an eye on the #Event and #WhisperingTide channels for call-outs. Meetups also work inside Flappy’s little zone. My Writhing Bladder Sac has contained a blue signet reward bag and 3 Extant Third Age Fragments. Not sure of the entire loot table for the Sac yet. 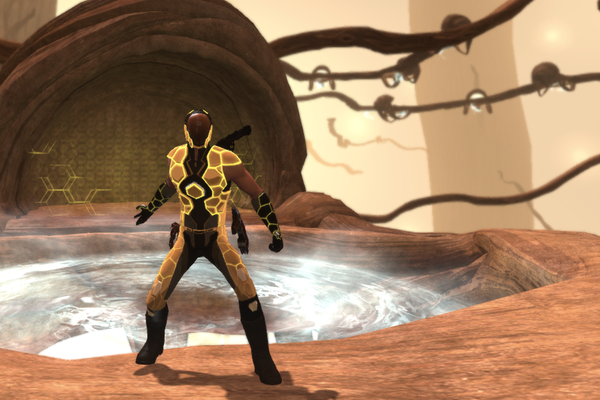 Finally, if you’ve done all the Whispering Tide quests leading up to this one (brace yourselves for the calamity on the forums from those who missed some), you will be rewarded with the helmet for the Carapace of the Immaculate Machine. There are also rewards for killing Flappy 15 and 50 times respectively. Don’t know exactly what they are, but one is called “Inky” (a pet?) and the other is “The Bane of Dis” (a title?).