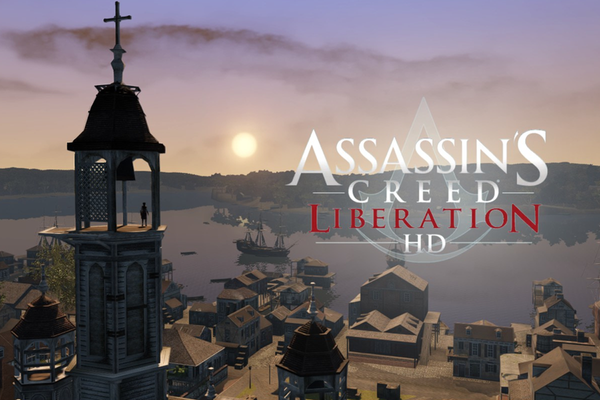 It is a shame that Ubisoft took so long to give us a playable, female Assassin (thought we had seen many female Assassins in all the previous games), because Aveline de Grandpré is just plain awesome. Hopefully this release, and 2K Games‘ upcoming Bioshock Infinite: Burial at Sea – Episode Two are a sign that the industry finally gets that it is possible to have a successful, female protagonist that isn’t all tits and ass. 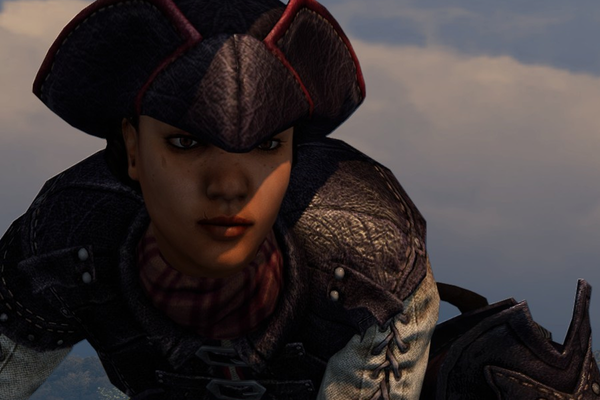 I’m not going to go into the the whole over-sexualized representation of women in video games argument, because that’s a whole other post. What I will say is that Aveline is presented as clearly feminine, but not a caricature of a woman. She is strong, intelligent, independent, and cunning, and manages to do all this in an era when being a woman, let alone a woman of color, was only slightly better than being a slave. 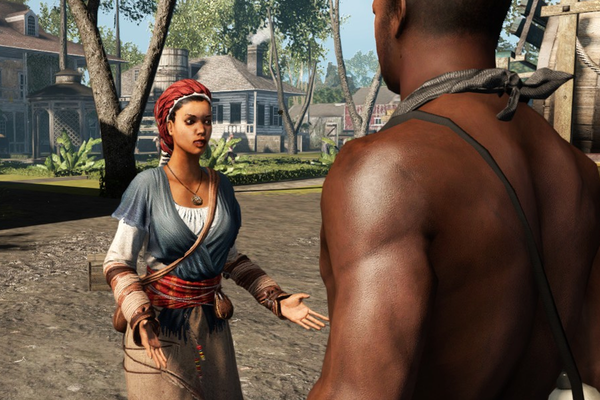 Assassin’s Creed: Liberation HD is set in colonial Louisiana, in a time when the city was changing hands between the French and the Spanish, and the English colonists to the north were whispering of rebellion. The story focuses, apart from the over all finding a Precursor Artifact metaplot present in all AC games, on the struggle to liberate slaves in and around the city. To aid in this struggle, Aveline has three personas she can (mostly) freely assume: The Slave (pictured above), The Lady, and The Assassin. 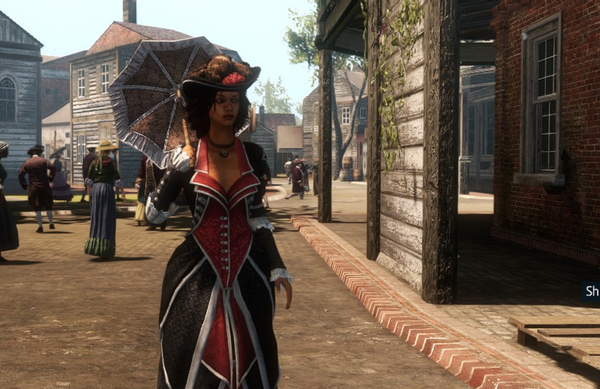 Each persona has its strengths and weakness, and there are many missions that must be completed in a specific persona, but there are also quite a few missions where the choice of persona is entirely up to the player, thus dramatically changing how each mission can be completed. As an example, The Lady (pictured above) cannot free run (no jumping or climbing in that dress, I’m afraid), but she can Charm officers to get past checkpoints and has a handy blowgun hidden in her stylish parasol. She also has a hidden blade. 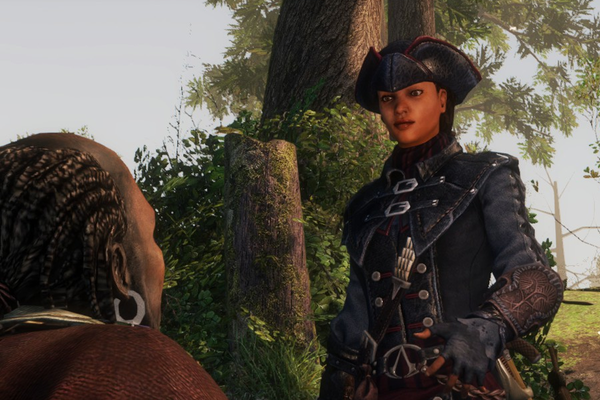 The meat of the game, though, is of course best played out in The Assassin persona. In it you have all the tools and tricks you’d come to expect from being a member of The Brotherhood: hidden blades, sword, hatchet (or Connor’s Tomahawk  if you so desire), smoke bombs, blowgun, and even a sweet bullwhip with some very nice mechanics. Aveline is clearly a woman in all her personas, and of course plays it up more as The Lady, but her gender is never over played. On the few occasions when her gender is even referenced, it is always in a period accurate way, mostly highlighting the injustices and inequalities heaped upon women of the time. 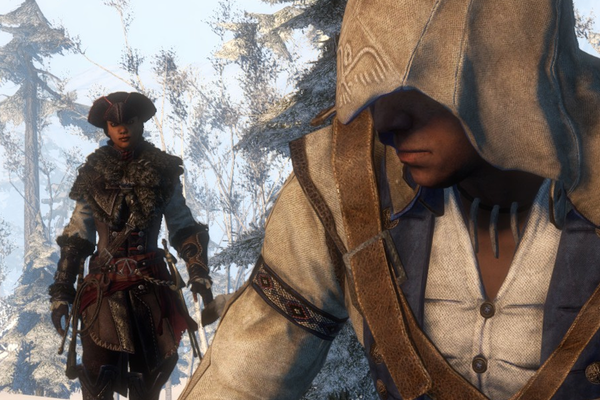 As an Assassin, Aveline is respected and treated equally by her contemporaries and fellow Brotherhood members and allies. Connor Kenway, in a mission that takes you to the cold northern reaches of New York, does not act as a guardian or protector, but a partner. In fact, the times when Aveline must seek male assistance, it is always for things that would have been difficult for a woman of that period to accomplish within the backward legal system of the time. Never is Aveline rescued by a man and, in fact, she rescues several men herself and even assists Connor in crossing an obstacle he would otherwise not have been able to traverse. And no, she doesn’t do it with feminine wiles; she does it with skill and strength. 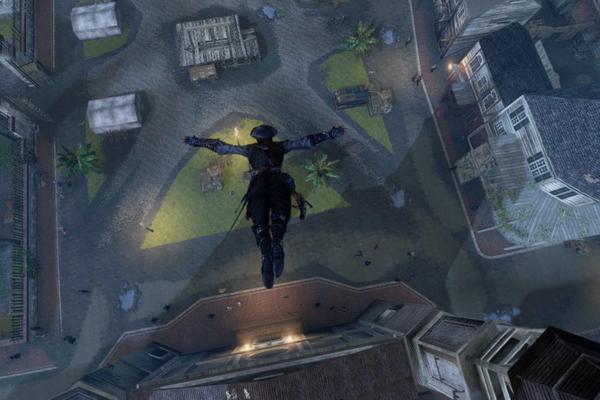 I never played Assassin’s Creed: Liberation when it was originally released on the PSVita, so I can’t really compare this new HD release to its predecessor. What I can do is say that the PC version (I played the Steam version) looks amazing. As usual, Ubisoft went above and beyond in making you feel like you’re actually in colonial Louisiana. 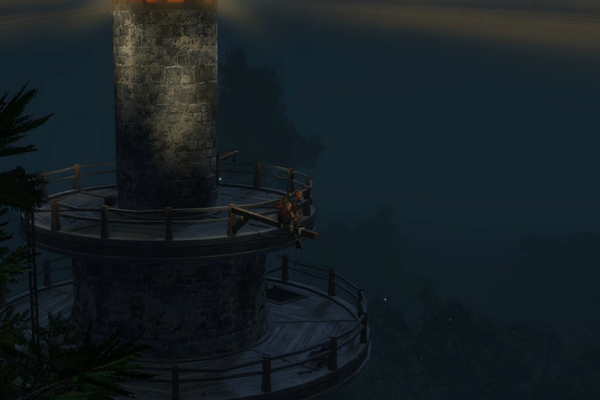 There are shantytowns, forts, and bayous to explore. The game also features the same tree climbing mechanics present in Assassin’s Creed III and Assassin’s Creed IV: Black Flag. You must even venture to Chichen Itza for some Mayan ruin climbing at one point. 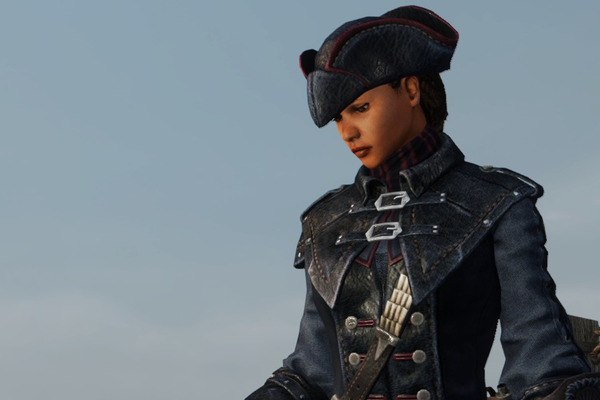 In short (ok, not so short), Assassin’s Creed: Liberation HD is everything you’d come to expect from the franchise and I really hope it is a sign of a change in the mindset of the big game studios. I really, really (I mean, really, Ubisoft, get on it) hope to see a DLC for Assassin’s Creed IV: Black Flag where we get to play Mary Reed or Anne Bonnie (or both). I also hope that the next major release in the franchise features a female protagonist. Aveline de Grandpré is, in my mind, the poster child for how it should be done. She will leave no doubt in your mind that women are a force to be reckoned with.