The first half of this post covered a couple of general tips as well as a whole lot of information about choosing Minions. Let’s face it, Hearthstone is really about Minions and how you use them to establish and maintain Board Control, and then subsequently bash your opponent in the face. This second half will cover a bit more on Minions as well as some more general but useful tips. Hang on to your butts.

Hero Health is a Resource: This mostly concerns the weapon wielding classes, but it’s a good concept to keep in mind at all times. Whether you win a match with 30 Hero health left, or 1, it’s still a win. For the classes that can wield a weapon, the weapon cards are a great source of removal not only because the weapon can be used immediately when it’s played, but because it’s far better to remove a 1/1 or 2/1 Minion with your weapon thus freeing up your Minions to hit your opponent in the face. If you’re playing a class that can wield a weapon, always pick up the weapon cards when available.

Windfury is Not as Useful as it Seems: While the idea of a 4, 5, or 6 Damage Minion being able to attack twice in the same turn is incredibly appealing, many of the Minions that have Windfury often have low health as well, making it impossible for them to attack twice when going for 1 for 1 trades. This doesn’t mean Windfury is useless — bashing your opponent in the face, twice in a row, with a 6 Damage minion is wicked useful — but  when given the choice between a Minion that has a better Mana cost to stat ratio versus one that has a poorer ratio but has Windfury I almost always go for the non-Windfury Minion.

Healing Minions Often Proves Fruitless: In most cases, both you and your opponent are going to be shooting for 1 for 1 trades where Minions are concerned. This generally means that Minions who can heal other Minions aren’t necessarily as useful as they seem because there should rarely be a Minion on the board that needs Healing. Like Windfury, Healing is something to be wary of choosing for its own sake. Consider the Mana cost to stat ratio, your current Mana Curve, and what you currently have in your deck before deciding on taking a Minion whose special ability involves Healing other Minions. 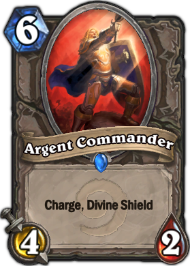 Some Minions are More Equal than Others: There are certain Minions whose abilities have such a huge impact on Board Control that NOT taking them would just be silly. The Argent Commander springs to mind, and also the Scarlet Crusader . In fact, Divine Shield is pretty powerful in and of itself as it almost always guarantees that a Minion protected by it will trade 2 for 1. Combine Divine Shield with Charge and 4 Damage, as it is on the Argent Crusader, and he’s a beast even though his Mana cost to stat ratio is less than desirable. I see this card in A LOT of decks and it makes me cringe every time. Honorable mentions here go to the Faceless Manipulator, which can be used to copy one of your opponent’s Minions or one of your own, and Ragnaros the Firelord who is devastating despite his ability being random.

With all of that said, I’ll close this out with some general things to think about as you’re playing. Take all of this, including the preceding post, with a grain of salt; these are things I’ve gleaned from playing, watching gameplay, and paying attention to the things my opponents do. I’m hardly an expert on this game, but keeping these things in mind has helped me a great deal.

Initial Draw: When looking at the first 3 – 4 cards you get at the start of a match, discard anything with a Mana cost of  5 or more, or anything that isn’t going to help you gain Board Control in those first three rounds. Maintaining Board Control after getting it early on is a lot easier than establishing it from mid game on.

Think Ahead: During your turn you should be thinking about what your opponent might do on their next turn and what you’re going to do following that.  Unless something completely unexpected happened during your opponent’s previous turn (which will happen less and less as you play more), you should be spending your turn doing what you planned before and thinking about what you’re going to do next.

Know When to Buff: If you are playing a Minion or Spell that buffs another Minion, ideally you want to play it on a Minion that can attack that turn. There is nothing worse than playing Minion and then buffing them, only to have them taken out during your opponent’s next turn. This may seems obvious, but I’ve done it more times than I can count.

Attack THEN Retreat: If you want to remove a Minion and place it back in your hand, by using something like the Youthful Brewmaster or the Ancient Brewmaster, attack with it first, then put it back in your hand. If you can take out one of your opponent’s Minions and have your Minion survive, or better yet hit your opponent in the face if they don’t have any Taunts up, before you return your Minion you’re getting 2 for 1 out of the returned Minion when you play it again at its full health.

Coax Out any Secrets: A few classes have the ability to play Secrets. These are Spell cards that activate during your turn under specific circumstances. Dealing with them effectively requires knowing the cards, but if you do it right you can often minimize the Secret‘s effect. As an example, say your opponent is a Mage and on any given round from 3 on (or 2 with a Coin) they play a Secret. It could be Counterspell, Ice Barrier, Ice Block, Mirror Entity, Spellbender, or Vaporize, so the first thing to do, if you have a cheap Minion on the board who can attack, is to hit the Mage in the face with that Minion. This will tell you if it is Ice Barrier (no big deal) or Vaporize (you only lose a cheap Minion). If nothing happens, cast a cheap Spell on one of your opponent’s Minions. This will tell you if it is Counterspell (you only lose a cheap Spell) or Spellbender (now you know). If nothing happens still, then it is either Ice Block or Mirror Entity. You can determine which by playing a cheap Minion. This way, if it is Mirror Entity, then you’ve only given them something you can cheaply trade 1 for 1. This same methodology can be used to tease out Hunter and Paladin Secrets, with different tactics of course, but in all three cases it requires knowing the Secrets that each class might play.

Try to Always Have Something in your Hand: During the mid to late game it can often happen that you end up with 1 or no cards left in your hand (especially if you loaded your deck with 2, 3, and 4 Mana cost Minions and you played more than one on a few rounds). When this happens it is sometimes best to hang on to the next card you draw in hopes that it may have some synergy with the card you’ll draw on your next turn. Obviously, if you have no Minions on the board and your only card is a Minion you could play, you should play it. But if you have 1 Minion you can play, and you draw another Minion you could also play, it’s not necessarily a good idea to play both and leave yourself empty-handed. Knowing what you have in your deck, what you’ve played so far, and what your opponent has played so far are all determining factors here. For example, has the Mage already played Flamestrike? Has the Shaman already played Forked Lightning or Lightning Storm? Has the Warrior already played Cleave? Has the Druid played Swipe? If not, then playing both could leave you with nothing on the board and nothing in your hand, where as holding one back will at least leave you something to play next turn.

I hope at least some of this blog post has been useful. I know much of it is a lot of common sense stuff, but they were things I, as a total CCG n00b, found incredibly useful. Again, take it all with a grain of salt. RNG can wreak havoc with even the most seasoned player’s strategy. I still recommend that you watch Adahn Ko, Gnimsh, and Zisspire‘s videos, but I think I’ve boiled the gist of them down here, so do as you will. And, PLAY!