In the week since my last Hearthstone post I’ve had quite a few ups and downs. This has been due, in large part, to me being a complete CCG n00b and not really understanding the concepts of Board Control and Card Advantage. I have to admit that over the weekend I was pretty much ready to throw in the proverbial towel: I was losing every single match in Casual, Ranked, and Arena, and I was really discouraged. I’d read a lot of articles, mostly over at Icy-Veins.Com (who I still think has some great Hearthstone resources),  but I just wasn’t getting it. In desperation I turned to YouTube and discovered Bog Otter. The dude was a god-send.

Bog Otter has a fantastic series of videos on building starter decks, from basic cards (those available when you level a hero to 10). The video above is his Mage Basic Deck video, but there are links to videos for all the classes at the end of it. The best part of all the videos is, though, that once he’s done showing you the hows and whys of choosing cards for a class, he then goes right into a match and shows you how to play them. In the Mage video above he takes his basic deck into a Ranked match … and wins.

For me the best part of each of them is his explanation of Board Control and how he works to maintain it. Paying close attention gives valuable insights into what Card Advantage actually means as well. Since the lightbulb finally went on in my addled brain, I’ve been finding a lot more success in game. Oh, I’m not roflstomping folks, but I’m seeing enough success that I’m no longer discouraged. In the last two days I’ve pretty much left Casual play behind and now only play Ranked when I have to time to wield the cards. Having a better understanding of Board Control has also gone a long way towards making Arena play more enjoyable and rewarding. 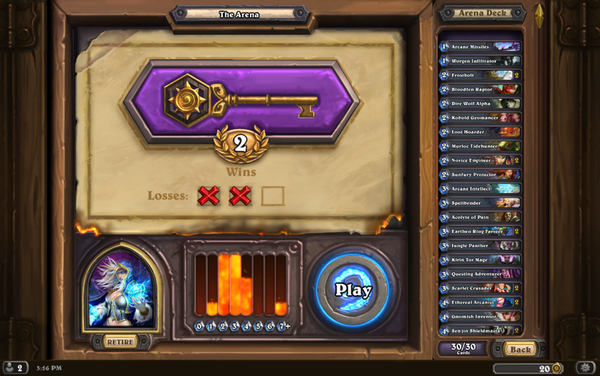 Prior to my epiphany, most of my Arena experience looked like the above: I’d quickly rack up a couple of losses, maybe get a win of two, then pile on the last strike and I was done. You do get a card pack out of it, and a little gold or dust, but for the most part it didn’t seem very cost effective to me. I’d horded about 500 gold and quickly burned through it with disappointing Arenas that yielded three card packs vs the five I could have just purchased. Using this Arena Draft Guide on Reddit, and a similar guide over on Icy-Veins.Com, I thought I was doing ok in building a decent mana curve, but you can see from the above screenshot that it had some holes. Not really understanding Board Control didn’t help either. 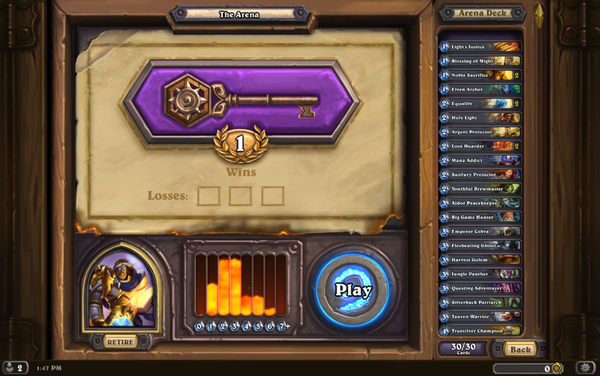 Since my enlightenment, though, things are looking up. I went away from the “Mage is the best class” mindset, chose a class that would offer me the ability to at least play a 1/1 minion almost any time, built a much better control mana curve, and jumped back in with my last bit of gold. So far it has been orders of magnitude better. The first match was a resounding victory where my opponent conceded in the 7th round. That was my last game yesterday. High on my newfound knowledge and confidence, I decided to step away and shake the sillies out. This morning I decided to do Ranked play instead of returning to the Arena, and I am still kicking myself for not getting a screenshot. 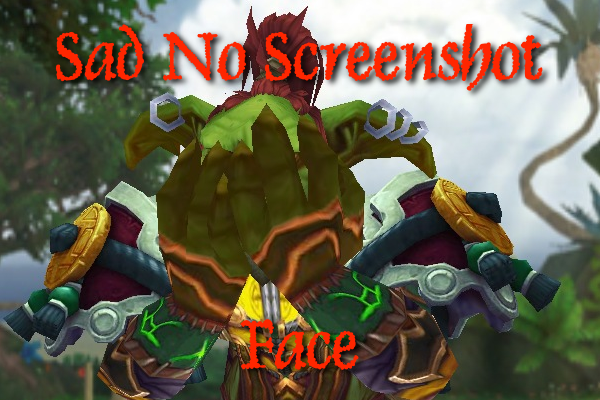 I’m currently ranked 20**; it’s not huge in the grand scheme of things, but it’s definitely bringing more challenging play my way and is a an accomplishment for me. My first (and only) match today was with my level 21 Mage, and a Warrior showed up to give me the business (man, I fucking hate Garrosh). I managed to do a pretty good job of maintaining board control, but by round five I was left with no minions on the board or in my hand, a fist full of spells, 15 health, and a sinking feeling in my stomach. Garrosh, the douche, had 3 minions up, an Arcanite Reaper in hand, 27 health plus 2 armor, and had poor Jaina by the short and curlies.

Round six began with me drawing a Sorcerer’s Apprentice.  As I said, I had a fist full of spells (and none of them were my sweet, sweet Pyroblast) that wouldn’t bring Garrosh down that round, so all I could really do was play the Apprentice and hand over the field. Garrosh, the weasel, thought he had me in the kill zone (and frankly, so did I), so he hit sweet Jaina with the Reaper and bashed her down to 1 health with his three minions.

The next round began and I seriously considered conceding. Generally, surrender isn’t in my nature. Oh, if you’ve got a field full of minions and I have an empty hand (that happened a lot previous to my moment of clarity), I might if I’ve had a particularly frustrating session, but generally I’ll just let you make the kill, toss out my “Well Played” and go cry into my beer. This time I sat back and really looked at my fist full of spells.

One of his minions had one health, so I could take it out with my Hero Ability. Done. I had two Ice Lances which are not particularly useful unless the target is frozen, but I could freeze Garrosh, the blackguard, and prevent him from bitch slapping me with that Reaper again. Done. I also had two Fireballs which would have been really nice finishers if Garrosh had been any where near death, but he was not. They could take out the other two minions, though, so one for each (remember, my Apprentice is reducing my spell cost by one). Done. I played a Novice Engineer to bring my side of the field to 2 minions, and I drew a Water Elemental. Ho-HO! Board Control was mine at 2 to 0. Things were looking better … if only I’d had more than 1 health or my Ice Block Secret, they’d have been great. I hit him with the Apprentice, then my Hero Ability and, convinced that he was going to draw some charging minion and finish me, I handed over the field. He drew (he only had one card, incidentally), and handed it back.

This round I hit him with my second Ice Lance (had to keep that Reaper in its case), played the Water Elemental, and drew a Leper Gnome which I immediately played. Board Control still mine at 3 to 0. Still pretty sure he was bound to get a charging minion I handed things back over, but his bad luck reigned and I got back control.

This play-by-play has already gone on long enough so I’ll wrap things up. For the rest of the game I pounded away at him with my minions and my Hero Power, the Water Elemental keeping him frozen and unable to wield his Reaper, and took him from 27 health plus 2 armor (and he kept stacking that armor hoping to draw something useful and finish me) to 0 health all while sitting at 1 health myself; no Ice Black and no Pyroblast.

The lessons I took away from this exhilarating experience were: one, it ain’t over ’til it’s over, two, by maintaining constant pressure for Board Control, I forced him to use up minions that might have served him well in the mid and late game, and three, buy judiciously using what cards I did have to their best advantage I was able to pull a win out of an apparently no-win situation. Sure, luck of the draw had a lot to do with it too — that’s the nature of the game — but, if I’d given up and not really looked at what I had I’d have never had my newfound expertise grant me a spectacular win.