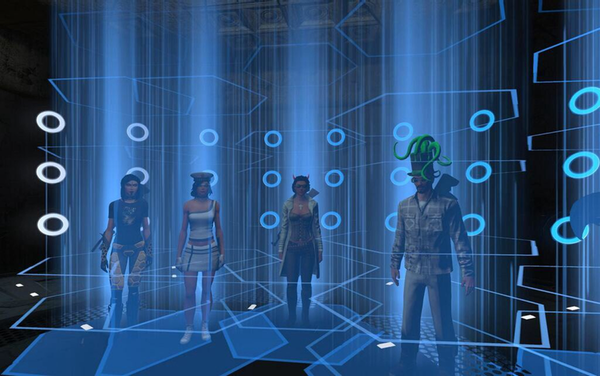 Last night’s Secret Monday was so full of sphincter-puckering excitement that I forgot to take any screen shots. To wit, I had to resort to thievery in order to present you with something other than my pedantic prose. If there is such a thing though, the sphincter-puckering was of the good variety. Our Secret Monday family grows and grows and last night we were able to fill two full five-man groups to tackle Scenarios.

Mogsy, Mr. Mogsy, Pid, Maric, and Grace made up team ‘Sweet Hats’, and Myself, Rowan, Sctrz, Ocho, and Syp formed team ‘Shit, I Need Help’. We have previously tried Scenarios in Normal difficulty at Group level and been shown the error of our hubris, so we opted, once again, to tackle Duos all around. Mogsy has a great writeup of Sweet Hats’ Scenario activities, and Rowan also has nice writeup on Shit, I Need Help’s romp in the Holodeck. Thus, I won’t go into a lot of detail except to say that we earned two Silvers and a Gold for our runs through The Hotel, The Mansion, and The Castle. We also had a really great time. 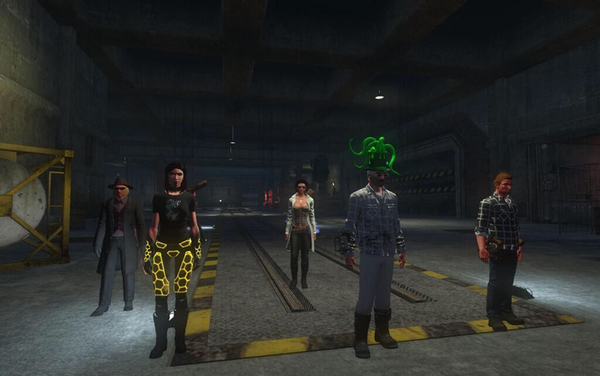 Once all the Scenario shenanigans were shaken out of our systems, we still had about an hour on our usual Secret Monday game clock. Ocho still needs a few Elites to get his invitation to share a can of whupass with The Gatekeeper, so Me, Pid, Maric, and Grace decided to run him through The Slaughterhouse. The decision to do The Slaughterhouse came about for two reasons: one, it’s one of Grace‘s favorites, and two, Mogsy is a biiiiiig chicken. That’s ok. I’ll get back at her by making her tank The Facility.

We honestly breezed through the whole instance. Almost all of the bosses fell on our first attempt at them. I even managed to do the fancy ‘just hold aggro on all the Things™’  for the Psychoassailant (first boss) fight so that DPS could just focus on the boss and take him down fast. Thanks in large part to Pid‘s heals we aced that fight and moved on to the only fight that gave us any trouble on the whole run.

NKL-107 is a jerkface. Grace turned us on to the hiding behind the rail car tactic, as opposed to the hiding in the meat locker tactic, and I have to say I much prefer it! I just wish I’d been able to get out of meat locker mode to make it work. Granted, I’ve only tanked NKL-107 once before, but still. I need a lot of practice.

After about five wipes we decided to just do the meat locker tactic because apparently that’s what my hands and fingers really wanted to do anyway. We took him down on that very attempt, and there was much rejoicing. I still want to try and make the rail car work because it is WAY more efficient. Still, we went on to one-shot the rest of the bosses in the Dungeon leaving Ocho with only Hell Eternal and The Facility to knock out. 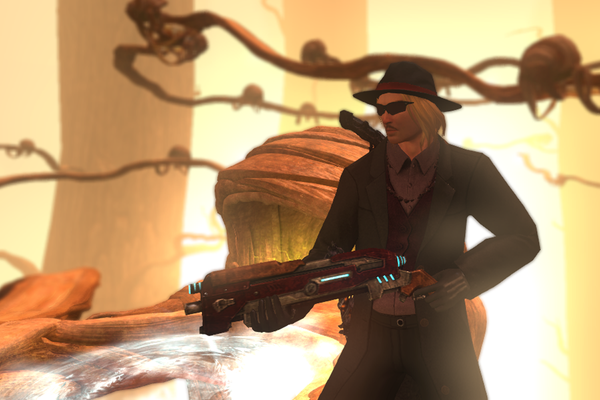 I managed to secure this sweet skin for my shotgun (which I think actually dropped off of NKL-107). I like how it’s all Steampunky. I may have to build an outfit around it for next week’s Secret Monday. This week I got Chucho a new do and mustache in honor of Movember and I had him decked out in an outfit I like to call, ‘It’s a Black Business.’ Exorcist hat, executioner glasses, Ritual bead necklace, Baron Samedi Vest, black suit and dress coat, black leather gloves,  black suit pants, and black low western boots make up the ensemble. 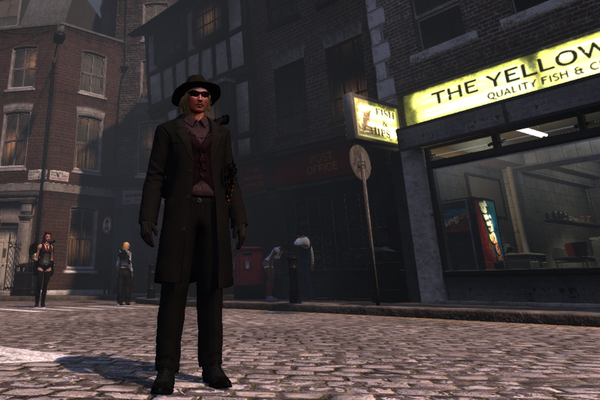 Tune in next week when we tackle yet more Scenarios (I sense this is going to be a long running theme) and perhaps drag Mogsy, kicking and screaming, into The Facility.