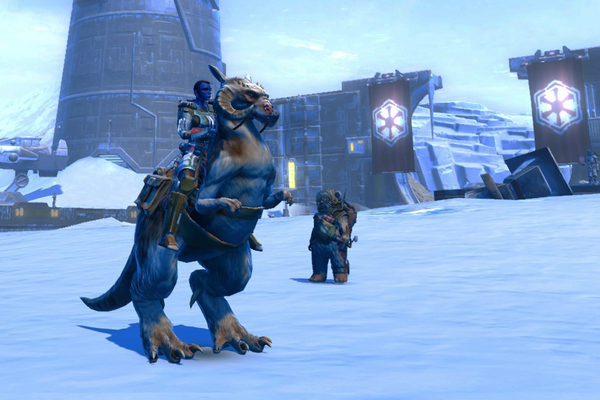 Up until two weeks ago, it had been just a little over a year since I’d played Star Wars: The Old Republic. Then our guild leaders decided to reinstitute TORsday and, since most Thursdays I’m available during the time slot that was picked, I decided to jump back in. Given that I had 2 level 50s on the Imperial side (the faction our esteemed leaders wisely decided to return to), it was a bit of a tough choice. In the end I went with my Bounty Hunter Mercenary, Lokairee; you can never have enough healers.

Since that time, two weeks ago, I’ve been spending most of my time on Makeb; I went ahead and bought the expansion with the 30 day subscription. I figured I’d be spending most of my time leveling from 50 to 55.  Then Bioware released Game Update 2.3: Titans of Industry, those bastards. I’m glad I’ve been saving those Cartel Coins I earned for being subscribed over a year ago, though, because I was able to jump in and buy Treek and her Appearance Kit. I then boogied on over to Hoth to start working on my TaunTaun Mount. I thought this would be something that would take a while, but I was actually able to knock it out in just over an hour total game play.

Tonight, for this week’s TORsday, the Imperial Mercenary Corps will be tackling the HK-51 quest chain. Most of us have been on an extended break from Star Wars: The Old Republic, so none of us have the companion. Should be loads of fun. Expect to see weekly updates on the TORsday happenings.