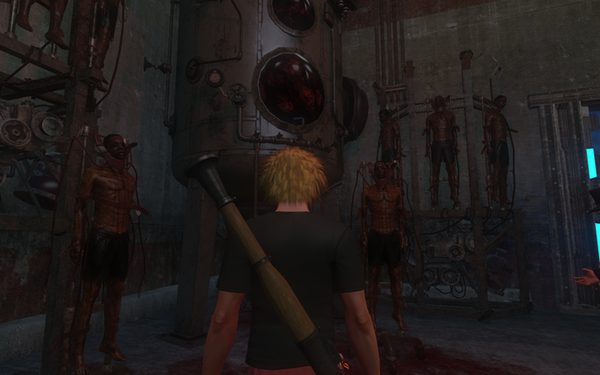 Yeah, that’s pretty much how we felt at the end of the night; all those bloody corpses hung up and canned in blood-filled vats. While this past Secret Monday was not a rousing success, as far as progression, it was a hell of a lot of fun.

After the past few weeks of Anniversary Event and Issue #7 goodness, and a few runs against Elite Dungeons we’ve been in, we decided to try something new. The ominously named Slaughterhouse seemed like a good fit; we’d been to Hell quite a bit recently, and MMO Gamer Chick is afraid of The Facility (not really, but it’s damn fun to tease her). None of us had ever been in The Slaughterhouse, so we decided to forego the study of walkthroughs and see how we did figuring the fights out on our own.

The bulk of the evening was spent on the first boss, Psychoassailant. It took us a little while to get the pattern of the Tesla Coils down (by all accounts it should be predictable — far, middle, near, repeat — but at times it seemed to bug and become random), and during that time we seemed to become encumbered with the same, weird, invisible debuff that affected us in Polaris last week, but eventually we prevailed. We all zoned out of the dungeon, went back in, and took the psychotic bastard down on the next attempt. We did not fair so well with NKL-107.

We went into the fight, high on our success with Psychoassailant, and in all honesty it didn’t take us long to figure it out. We didn’t have difficulty with DPS or Heals, or our Tank‘s ability to withstand the hits. It all seemed to be an issue of positioning. By the end of the tenth or so attempt, we’d mostly worked it out, but by then we were all beat. We’ll take another shot at him again soon; perhaps next week. Or, maybe we’ll go for an easy win to boost our morale. For me, personally, it hardly matters. I just love running with the Knights of Mercy, no matter what we do. 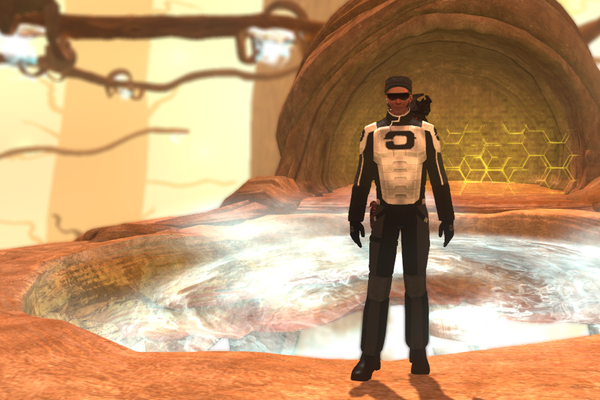 Last night I cycled though three different outfits: Panoptic Core, the Teddy Savior, and the Orochi Tactical. I spent most of my time in the Orochi gear, to which I added the Tactical Headset, and the Military Cap. I think they finish off the Orochi gear well. Next week, I think I’ll go for something wacky. We’ll see.