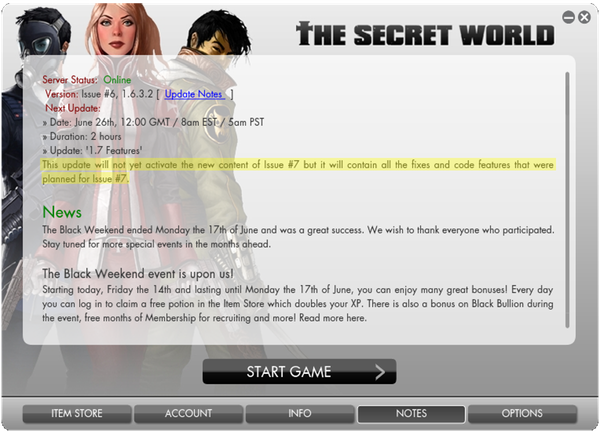 When I logged into The Secret World today, I happened to glance at the notes concerning tomorrow’s update, which is titled ‘1.7 Features‘. I nearly, honestly, wet myself. After a quick trip to the head, I came back and finished reading.

This update will not yet activate the new content of Issue #7 but it will contain all the fixes and code features that were planned for Issue #7.

Again, there was a bit more excitement until I read it a second time. “… all the fixes and code features that were planned for Issue #7.” On the second read it’s rather ominous sounding. While it seems we will be getting fixes and changes to the existing game that were planned for Issue #7, it certainly sounds like maybe Issue #7 content itself might be taking longer than planned. Otherwise, why not wait until Issue #7 to release the fixes and code changes?

Hopefully this will be cleared up in Joel’s Game Director’s Letter for June, which I will now be checking for this weekend.