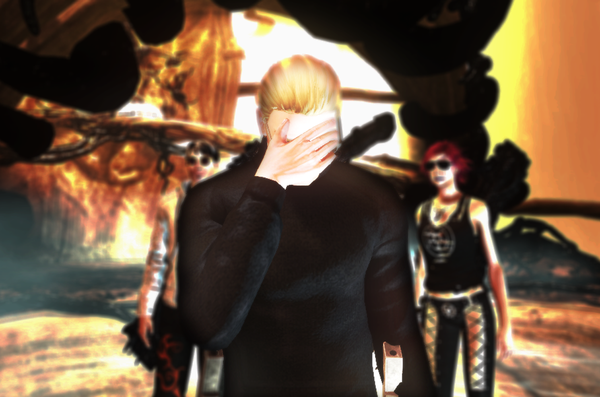 This morning, during my daily PUG of Enter the Filth Phase 2 (with my morning coffee), I had a completely avoidable bit of drama creep into what is usually a very pleasant ‘wake up and start the day’ period for me. Of all the MMOs I have played, and of course your mileage may vary, The Secret World by far has been the most drama free of the lot. I don’t know if it’s the smaller community, or the over all maturity of the material attracting more mature players, but I can count on one hand the times I have experience drama, angst, or plain stupidity from other players in the game. So, when it does happen it kind of sticks in my craw. This particular situation played out as follows.

After my usual announcement  as an available damage dealer on the #WhisperingTide channel, I was picked up by a group looking to do both the Normal and Nightmare versions of Enter the Filth Phase 2. Following the ubiquitous round of hellos in Group Chat, we picked up the Normal version of the quest and hopped in. Like a hot knife through butter, as we were all victorious veterans of the Gatekeeper fight, we mowed down the opposition, hopped out, grabbed the Nightmare version of the quest, and slipped right back in with no further conversation; a typical run.

Most of this run went the same way (sans the hellos), but somewhere between the second and third boss, I had a slip of the mouse and accidentally clicked Need on a Blue Talisman Toolkit that dropped. I immediate posted my apologies and my willingness to trade it to whoever wanted it in Group Chat. My statement was followed by an accusation of being a Loot Ninja from one of the other players. I waved it off as just being a faster typist than them and, as the other three all said they didn’t care, I tried to open Trade with the accuser to just hand it to them. They had Trades blocked.

I sent them a Tell, asking them to enable Trades, so I could hand it off. No response. In fact, after the initial accusation, there was no further response from this player in either Group Chat or Tells. I shrugged and moved on inwardly vowing to Pass on anything else that dropped (which I did) for the rest of the run … I’m going to take a side bar here:

Even during my hay day of Raid grinding in WoW, drops have never really been all that important to me. Sure, and especially in WoW, better gear means better performance, but most of the time I run with folks I know and as long as someone gets the drop, as a group, we’ll be improving. I like to think that I am more than fair when it comes to this sort of thing (and, G-d, I hope the folks I run with would agree, otherwise I’m incredibly diluted), and mostly it’s because nine times out of ten it’s not all that important to me. That’s not to say I never Need on drops; of course I do. My clicking of the Need button, though, is generally preceded by a quick poll of the group to see if anyone needs it more than I do. My motivation is to have fun, and I do my best to ensure I never slight anyone and create resentment because that is hardly fun. My philosophy in this matter applies equally whether I’m running with a group of friends or I’m in a PUG. Arguably, I’m even more diligent about it during PUGs. In the past, I’ve had a few of these accidental Needs, and usually it’s quickly settled when the rest of the group realizes it was an accident and I hand it off to someone who truly needs the drop.

Anyway, I assumed that in this particular case the original accuser had just decided to drop the matter and move on as well, and I hoped that my passing on the rest of the drops would ameliorate the situation. It seems, though, that I was wrong. The player had apparently turned to sending Tells, which I couldn’t see, to the group leader demanding I be kicked from the group for the offense. I learned this when the leader sent me a Tell asking me to Trade the item to the accuser. I explained that they had Trades blocked and so the leader asked me to Trade the item to them instead (I assume to attempt the Trade themselves), which I did.

This was all, it would seem, not good enough for the accuser, as they continued to pester the leader, in Tells, and ultimately the leader became so fed up that they kicked the accuser from the group. The accuser then refused to leave the instance in some vain attempt to prevent us from inviting a replacement to complete the final boss fight. We ended up not needing one; we four-manned the boss and left.

I relate this incident not to point fingers or call anyone out. Apart from thanking Musu, Smal, and Atar for being understanding and backing me up, the accuser’s name will appear nowhere but on my Ignore list. I decided to write this post because this whole situation came down to communication, or a lack there of.

Perhaps there was a language barrier, I have no idea, but had my accuser simply read my apology and acknowledged my willingness to immediately rectify the situation (or responded to me in ANY way so that we could attempt to understand one another and fix the situation) there would have been no situation. In short, if you, dear reader, ever are slighted and have occasion to accuse the offender, at least allow for a dialog. If the offender is truly a blackguard, it will become apparent fairly quickly in the course of your parlay, and steps can be taken. If, instead, there was a misunderstand, then the situation can be rectified; no muss, no fuss.

I actually feel terrible about this whole thing (another reason for posting about it), and wish I’d been given a chance to make things right for the player who felt slighted. At this point, however, I have to be content in the belief that I did all I could to fix it and that the majority of those involved seemed to agree.