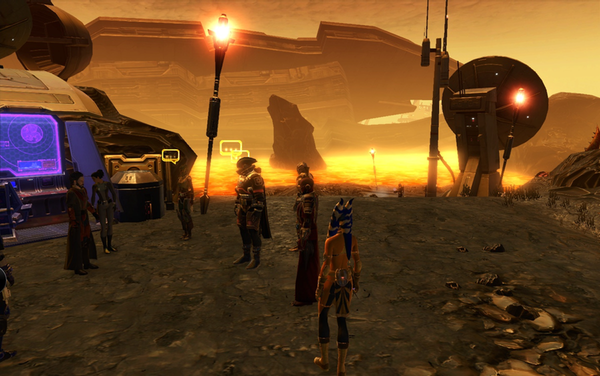 With the release of Star Wars: The Old Republic‘s latest content patch, 2.4, this week, the Imperial Mercenary Corps decided to put boots on Oricon and see what all this Dread Master noise was about.

I had scouted out the planet earlier in the week, so for most of the night on TORsday, I was acting as point and guide. For those of you who haven’t made it planet-side yet, here’s the scoop. 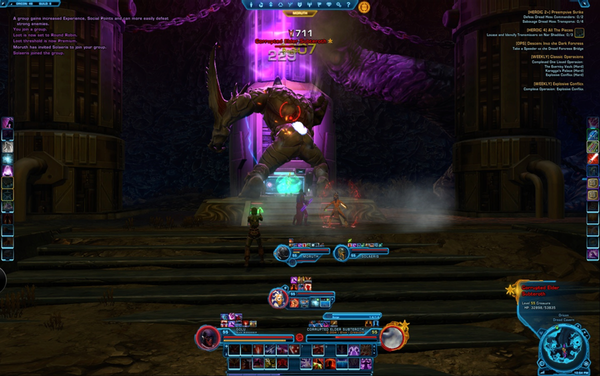 Oricon is the culmination of the Dread Masters storyline. In length it’s about the same as CZ-198, but the scenery is much less monotonous and the quests are a bit more difficult to do solo; you’ll want to bring a well-geared healing companion with you. There are three bosses to defeat that have some frustrating mechanics, so if you have interrupts bring them along and make sure to use them.

The Corrupted Elder Subteroth isn’t too bad. He doesn’t do anything special, but he hits like a truck, so here’s where your healer companion will come in handy. Also, interrupt whenever you can. The second is the Corrupted Bothrium Beast. He has two healing abilities that can quickly make the fight end badly for you. The first is that he’ll summon a tentacle that will heal him very quickly unless it’s killed. You’ll recognize this tentacle by the green beam running from it to the Beast. Kill it when you see it. His second ability is a channeled healing cast. Interrupt it. Fast. The last boss is Commander Zaoron. Most of what he does isn’t too bad, with a healing companion along, but he has one channeled attack that will pretty much destroy you unless it’s interrupted. Again, interrupt whenever you can and you should be golden.

All of the Quests in the quest chain turn into Dailies, some with slightly smaller goals. The Heroic 2+ at the end also changes names when it becomes a Daily. There is also an Area Daily quest. Lastly you’ll pick up a Quest to start the new Operation, which I think is the finale of the Dread Masters storyline.

While all of Oricon is much more challenging than CZ-198, for the solo player, as a group we roflstomped through the whole thing on TORsday. We got cocky near the end and pulled more than we could handle running the Heroic 2+, but if you do these Quests/Dailies in a group you should have a much easier time.

I really liked all the quest chain cut scenes and the progression of the Dread Masters storyline, even if it was a little predictable. As always, voice acting is top notch. The Imperial Mercenary Corps really seemed to enjoy it too, though I think a couple of our non-Force users found the story a little excluding. All in all a good time, as always.